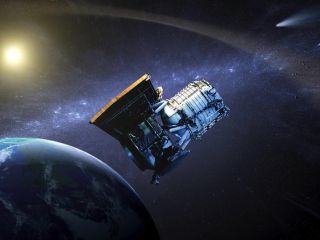 An artist's concept showing the Wide-field Infrared Survey Explorer, or WISE spacecraft, in its orbit around Earth.
(Image: © NASA/JPL-Caltech)

Look at a picture of the Earth at night, and the world appears to be, quite literally, glowing. Now, scientists are starting to look for signs of advanced alien civilizations by the glow given off by technology used to harvest the energy from a star or even an entire galaxy.

Theoretical physicist and mathematician Freeman Dyson first proposed the idea that advanced alien civilizations might develop technology to encircle a star and harvest most of its power, a structure now known as a Dyson sphere. If these objects do exist, astronomers might be able to detect the waste heat they produce using telescopes that peer into space using infrared light.

"The main point," Dyson told LiveScience, "is looking for aliens who don't want to communicate. My question was, 'How do you look for silent aliens?' They have to radiate away their waste heat. The only way to do that is to radiate lots of infrared radiation." [13 Ways to Hunt Intelligent Aliens]

Now, astronomers at Pennsylvania State University are starting to narrow the search for Dyson spheres. But the search has only just begun, and may take hundreds of years, Dyson said. Finding Dyson spheres isn't inevitable, but "it's certainly possible," he said.

Much of the search for extraterrestrial intelligence (SETI) effort has focused on listening for radio signals sent by an intelligent civilization, as depicted in the movie "Contact." But this approach assumes the aliens want to communicate with humans. Dyson spheres get around this problem, because even a civilization that wasn't actively trying to communicate with others would give off waste heat.

Russian astrophysicist Nikolai Kardashev classified long-lived civilizations as one of three types: those that control the resources of a planet (Type I), of a star (Type II), or of a galaxy (Type III). A Dyson sphere represents a Type II civilization.

An episode of "Star Trek: The Next Generation" depicts the starship Enterprise responding to a distress call from a transport ship that has crashed into the outer hull of a Dyson sphere. But Dyson himself never envisioned the structure as a solid sphere.

"It doesn't have to be a sphere at all," Dyson said, "just any place where aliens happen to be generating a lot of energy." He described his structure as an "artificial biosphere," which could be a cloud of objects orbiting a star closely enough to absorb all the starlight. A solid sphere would be too weak to support its weight against the gravity of a star. [Shell-Worlds: How Humanity Could Terraform Small Planets (Infographic)]

Dyson estimated that an alien civilization with a surface temperature around 80 degrees Fahrenheit (27 degrees Celsius) would emit infrared radiation at a wavelength of around 10 microns. Earth's atmosphere emits a lot of radiation in this region, so a telescope located in space would work best. But the necessary technology wasn't available when Dyson proposed the idea.

Then, in 1983, an international team launched the Infrared Astronomical Satellite (IRAS), the first observatory to image the entire sky in infrared light. "It turns out the sky is crawling with infrared sources," Dyson said, but most of these are from galactic dust and other natural sources.

More recently, Richard Carrigan, now a scientist emeritus at Fermilab near Batavia, Ill., used IRAS to look for Dyson spheres. "By the time I got to it, there had been a nice history of people trying, but not on a systematic scale," Carrigan said.

A Dyson sphere should act like a "black body," a hypothetical object that absorbs all the electromagnetic radiation falling on it and radiates energy depending on its temperature. A black body looks similar to galactic dust in the infrared, but there are differences in the spectra — the range of colors corresponding to its composition. [UFO Quiz: What's Really Out There?]

Carrigan measured the infrared spectra using IRAS's spectrometer, but found only a few objects within several hundred light-years of Earth that could be Dyson spheres. (One light-year is about 5.9 trillion miles, or 9.5 trillion kilometers.) He and his colleagues used the SETI Institute's Allen Array to listen for radio signals emanating from these objects, but found none.

What if alien civilizations have developed Dyson spheres that use the energy from entire galaxies? Carrigan tried searching for Dyson sphere galaxies, because those would be easiest to detect. Now, Jason Wright, an astrophysicist at Pennsylvania State University, is doing the same thing, using the Wide-Field Infrared Survey Explorer (WISE) space telescope.

"WISE was launched by NASA for pure, natural astrophysics," Wright said — "it just happened to be perfect Dyson sphere finder." If a Dyson sphere galaxy were giving off mid-infrared, it would be "boomingly bright," Wright said.

Wright and his colleagues found no evidence of Dyson spheres that block out 50 to 100 percent of their galaxy's light. Now, his team is trying to narrow down the fraction of a galaxy that could be contained by Dyson spheres even further: "We think we can get down to 20 to 30 percent with the WISE satellite itself," he said. The team plans to follow up on the best Dyson sphere candidates with other telescopes, and go on to look for Dyson spheres around individual stars.

Another idea that Dyson himself proposed, but which astronomers haven't tried, is to look for "skid marks" on the sky from spacecraft slowing down from speeds close to the speed of light. These could create long streaks of ionized gas that might be visible to some telescopes, Dyson said.

If astronomers do find hints of Dyson spheres or other extraterrestrial technology, it would trigger a worldwide effort to look at them using different astronomical instruments. Even if scientists don't find alien civilizations, the search could discover interesting new physics.

"At the very worst, we will be able to put an upward limit on the amount of starlight alien civilizations use," Wright said, "and at best, we might find something very interesting and extraordinary — whether a new class of astrophysical object, or something so strange we'll need to point SETI instruments at it."