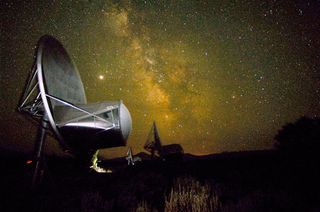 Any intelligent extraterrestrial life that exists probably won't announce itself by blowing up the White House, or win over the hearts of children as a lovable alien with a glowing finger. Many scientists simply hope to find evidence of them by scanning the skies for a radio signal from a distant star's alien civilization. But such efforts may also risk overlooking clues of past alien activity right here on Earth.

If aliens did leave their mark on Earth by some wild chance, we could search for the possible "footprints" of alien technology or even analyze the DNA of terrestrial organisms for signs of intelligent messages or tinkering. Such a CSI-style forensics search could complement, rather than replace, the Search for Extra-Terrestrial Intelligence (SETI) astronomers who continue to look skyward, said Paul Davies, a physicist and cosmologist at Arizona State University in Tempe, Ariz.

"My proposals aim to spread the burden from a small band of heroic radio astronomers to the entire scientific community," Davies said. "Projects like genomic SETI are an attempt to complement radio SETI, not undermine it."

Davies wants scientists to broaden their thinking about how aliens could have left behind their mark. Having worked with SETI for three decades, he has written about his ideas in a book, "The Eerie Silence" (Houghton Mifflin Harcourt, 2010) and articles such as one that appeared in the online August edition of the journal Acta Astronautica. [5 Bold Claims of Alien Life]

But Davies does not think such intelligent alien life must necessarily exist. And his many years of supporting SETI have not stopped him from describing the needle-in-a-haystack search as "a search without any clue as to whether there is a needle there at all, or how large the haystack may be."

To their credit, SETI astronomers have not ignored the possibilities beyond extraterrestrials deliberately beaming a message straight at Earth. Suggestions over the past 50 years include extraterrestrial radio traffic that happens to pass by, or a powerful radio or optical beacon that sweeps the Milky Way galaxy like a lighthouse.

A very advanced alien civilization might have built huge astro-engineering projects called Dyson spheres to directly tap the power of stars. By putting a shell of material around a host star, aliens would not only trap much of the star's heat, but also create a unique infrared signature that Earth astronomers could detect.

Just as Earth sends out robotic explorers, an alien civilization could have left behind dormant probes at strategic locations such as in the asteroid belt. Earth astronomers could try searching for such probes or even beaming "hello" radio messages to suspected locations in an attempt to "wake up" the probes.

There's also a chance that past visits to Earth by intelligent aliens left signs much closer to home. But probability and the length of the universe's age suggest that any such alien visit would have taken place before humans ever emerged on Earth, Davies said.

That means any traces of an alien visitationwould have had to survive for hundreds of millions or billions of years for humans to still find them today.

"If there is another form of life on Earth, we could find it within 20 years, if we take the trouble to look," Davies told Astrobiology Magazine. "Of course, it may not be there, but searching our own planet is far easier than searching another one."

Non-human deposits of nuclear waste consisting of plutonium would point to artificial origins, because natural deposits would have long since decayed, Davies said. Scars of mining or quarrying could remain buried beneath the Earth or on its moon.

Alien "messages in a bottle" or artifacts similar to the monoliths of "2001: A Space Odyssey" would seem less likely to survive for hundreds of millions of years on Earth because of geological and weather forces.

Perhaps the most fascinating possibility is if aliens used bioengineering to leave behind unintentional or intentional traces or messages in the DNA of life on Earth. The self-perpetuating nature of life forms could help ensure survival of any such biologically-embedded messages.

Citizen scientists and school students could pitch in to run genomic versions of SETI programsto find any such traces, Davies said. Data-mining software programs could do much of the heavy lifting as just a small part of the usual genomic analyses going on in everyday research.

Alien bioengineering might have also created a "shadow biosphere" of life built upon biochemistry separate from that of Earth life forms. Examples would be life forms that don’t use DNA or proteins, or incorporate different elements in their biochemistry than all other known life forms on Earth do.  Scientists have already begun major efforts to find shadow biospheres, but of natural rather than artificial origins.

If scientists find "weird" shadow organisms that arose separately from the Earth life forms we know, that won't necessarily suggest intelligent alien involvement. But such a find could give more credibility to the idea that life has a good chance of arising when given the right circumstances, rather than simply being a one-time freak accident, Davies said. And that might make everyone feel a little less alone.