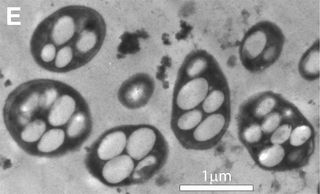 Scientists haven't yet found E.T., but thediscovery of an Earth microbe that thrives on arsenic should greatly broadenthe search for life beyond Earth, NASA announced today (Dec. 2).

In a much-anticipated press conference, NASAannounced that the bacteriumGFAJ-1, found in a brinyCalifornia lake, doesn't just tolerate arsenic ? it can incorporate thepoisonous stuff into its DNA and other vital molecules in place of the usualphosphorus.

"We've cracked open the door to what'spossible for lifeelsewhere in the universe," said study lead author FelisaWolfe-Simon, NASA astrobiology research fellow at the U.S. Geological Survey inMenlo Park, Calif. "What else might we find? What else might we want tolook for?"

NASA sent out alerts for the conference onMonday (Nov. 29), setting the Internet abuzzwithspeculation and rumors that life beyond Earth had been found, perhaps onTitan, Saturn's largest moon. The actual discovery ? which is very muchterrestrial ? falls short of those expectations, dashing the hopes of some whomay have let their imaginations run wild.

"I'm sorry if they'redisappointed," Mary Voytek, director of NASA's astrobiology program, toldreporters today. "But this is a huge deal. This is a phenomenalfinding."

Scientists had regarded phosphorus as one ofsix key ingredients ? along with carbon, hydrogen, nitrogen, oxygen and sulfur? that all life on Earth needs to survive.

So finding a microbe that substitutes arsenicfor phosphorus is like coming face to face with the fictional Horta beast fromthe science-fiction TV show "Star Trek," one of the scientists said. The Horta wasbased on silicon rather than carbon.

"In our mind, this is theequivalent," Voytek said. "It will fundamentally change the way wedefine life, and perhaps the way we look for it."

In particular, scientists hunting for life onTitan, Mars and other bodies throughout the solar system and beyond should opentheir minds, according to researchers. For if some life-forms on Earth aredoing something so radically different, who knows what alien life might looklike? [TheWeirdest Life on Earth]

"The implication is that we still don'tknow everything there is to know about what may make a habitableenvironment," said astrobiologist Pamela Conrad of NASA's Goddard SpaceFlight Center in Greenbelt, Md. "It opens up our perspective."

The discovery also stresses that researchersshouldn't focus narrowly on looking for signatures of certain molecules, Conradadded. Rather, they should assess a variety of variables at any particularsite.

As an example, arsenic may be a more likelylife ingredient than phosphorus in certain environments, suchas Titan, researchers said. Titan is so cold ? temperaturesaverage minus 290 degrees Fahrenheit (minus 179 degrees Celsius) ? that stablemolecules like phosphate might not be reactive enough to help generate orsustain life.

Phosphate, a molecule composed of phosphorusand oxygen, is a key ingredient in the DNA of "normal" life. In theweird bacterium, the much more unstable arsenate apparently can take its place.

Benner made the skeptic's case against thenew discovery, saying he thinks arsenate is likely too unstable to have beentruly incorporated into the bacterium's DNA.

The arsenic-munching bacterium can utilizephosphorus as well as arsenic. In fact, it grows faster when given phosphorus.So it's probably just extremely adaptable, not a life-form so fundamentallydifferent as to belong to an entirely separate tree of life, researchers said.

But such organisms may be out there, waitingto be found. If such a "shadow biosphere" exists ? if life has trulyevolved more than once on Earth ? that implies that life isn't so special, thatit can take root fairly easily. So the odds of life existing elsewhere in theuniverse would shoot up.

So it's important to make sure life-huntingprobes are flexible ? able to explore many different environments and to lookfor many different molecules, researchers said. That way, future probes couldreduce the chances of overlooking evidence of alien life simply because itappears in a form that is completely unexpected.

"You would hate to go somewhere and not find it," Conrad said.