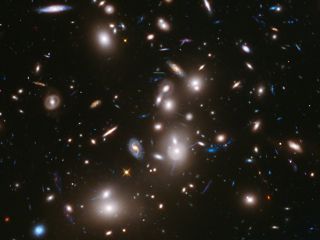 This space wallpaper is a long-exposure Hubble Space Telescope image of massive galaxy cluster Abell 2744. The image shows some of the faintest and youngest galaxies ever detected in space.
(Image: © NASA, ESA, and J. Lotz, M. Mountain, A. Koekemoer, and the HFF Team (STScI))

More than 3,000 scientists are gathering in Washington, D.C. this week for a five-day conference that has been billed as the "Super Bowl of astronomy." The 223rd meeting of the American Astronomical Society (AAS) ran from Jan. 5 to Jan. 9. Researchers from around the world presented the latest findings about our own solar system, alien planets, black holes and the evolution of the universe, among other topics.

SPACE.com reporters Miriam Kramer and Tanya Lewis are in Washington for the AAS conference. Our  complete coverage of meeting appears below, with the latest news first:

Sunday, Jan. 12: Hubble Telescope Captures Spectacular Views of Spidery Tarantula Nebula (Photos )
A new photo shows a spooky looking nebula shining in never-before-seen detail. The nebula is known as the Tarantula Nebula and is located about 160,000 light-years from Earth in the Large Magellanic Cloud, one of the closest galaxies to the Milky Way.
Photos: Cosmic Spider: Amazing Tarantula Nebula Photos

Friday, Jan. 10: Searching for Time Travelers, Scientists Look to Social Media
Time travelers, if they exist amongst us, have yet to betray their period-hopping ways online, according to a fun, new study that tried to search out visitors from another time, based on their digital footprints.

3D-Printed Hubble Telescope Photos Help Blind Touch the Universe: Video
Astronomers with the Space Telescope Science Institute in Baltimore are using a 3D printer to turn Hubble images into textured pictures, opening up the wonders of the universe to people who are visually impaired.

Super-Earth Planets May Have Watery Earthlike Climates
According to a new model, tectonically active "super-Earth" exoplanets likely store most of their water in the mantle, leaving exposed continents and oceans that would create a stable climate such as that of Earth.

Scale of Universe Measured with 1-Percent Accuracy
An ultraprecise new galaxy map is shedding light on the properties of dark energy, the mysterious force thought to be responsible for the universe's accelerating expansion.

Smallest, Faintest Galaxies of the Ancient Universe Spotted
The Hubble Space Telescope utilized a natural zoom lens to capture nearly 60 of the smallest, faintest galaxies ever spotted in the distant universe. In a separate study, observations by the Spitzer Space Telescope helped researchers determine the masses of four of the brightest early galaxies after Hubble picked them out.

Will NASA's Ailing Planet-Hunting Kepler Spacecraft Get New Mission?
A crucial deadline looms for the team that hopes to get NASA's hobbled Kepler space telescope back in the planet-hunting game.

Wow! Hubble Snaps Super-Deep View of Universe (Photos)
A new set of breathtaking photos reveals a never-before-seen deep view of the universe. Released as the first "Frontier Fields" view from NASA's Hubble Space Telescope, the new images mark the deepest-ever observations of a cluster of galaxies.

New Exoplanet Imager Snaps 1st Photos of Alien Worlds
Astronomers have detected nearly 1,000 planets outside of our own solar system, but little is known about their composition. Now, the Gemini Observatory's Planet Imager enables scientists to image exoplanets directly.

Newfound Earth-Mass Planet Is a Gassy Puffball
Astronomers have spotted a hotter and puffier version of Earth circling a distant star. The oddball exoplanet candidate KOI-314c is located about 200 light-years away and is roughly the same mass as Earth, but its extremely thick atmosphere makes the world about 60 percent larger than our home planet, scientists say.

Abundant 'Mini-Neptunes' Form New Class of Alien Planets
There's a new kind of planet to add to the Kepler spacecraft's cornucopia of alien worlds, and you won't find it in Earth's own solar system.

'Super Bowl of Astronomy' Conference Kicks Off Sunday
More than 3,000 scientists will gather in Washington, D.C. this week for a five-day conference that has been billed as the "Super Bowl of astronomy."