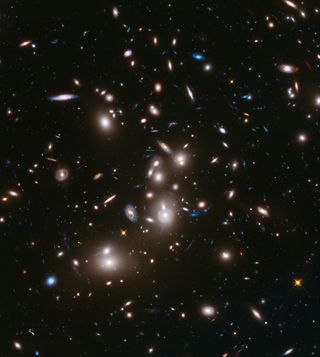 This long-exposure Hubble Space Telescope image of massive galaxy cluster Abell 2744 is the deepest ever made of any cluster of galaxies. It shows some of the faintest and youngest galaxies ever detected in space.
(Image: © NASA, ESA, and J. Lotz, M. Mountain, A. Koekemoer, and the HFF Team (STScI))

WASHINGTON — A new set of breathtaking photos reveals a never-before-seen deep view of the universe.

Released as the first "Frontier Fields" view from NASA's Hubble Space Telescope, the new images mark the deepest-ever observations of a cluster of galaxies. The photos center on Abell 2744, a group of several hundred galaxies found 3.5 billion light-years away from Earth.

The images also capture background galaxies more than 12 billion light-years away, whose light has been magnified and brightened by the immense gravity of Abell 2744 in a phenomenon known as gravitational lensing, researchers said. [Celestial Photos: Hubble Space Telescope's Latest Cosmic Views]

"The Frontier Fields is combining the power of nature's telescopes — these massive clusters of galaxies — with Hubble to provide the intrinsically deepest yet view of the universe," Jennifer Lotz, a principal investigator with the Space Telescope Science Institute in Baltimore, said here today (Jan. 7) during a press conference at the 223rd meeting of the American Astronomical Society.

Teams working with Hubble and NASA's Spitzer Space Telescope and Chandra X-Ray Observatory — collectively known as the Great Observatories — are all working to create these Frontier Fields exposures to probe more deeply into the evolution and origins of galaxies and black holes. The new Hubble image revealed almost 3,000 background galaxies with hundreds of other galaxies in the foreground.

The background galaxies look about 10 to 20 times larger than they would usually appear, and the faintest of those galaxies is intrinsically 10 to 20 times dimmer than any galaxy seen before, NASA officials said.

"Astronomers are very interested in the faint galaxies that live behind those clusters," Lotz said. "We're trying to understand what those very faint distant objects are."

While Abell 2744 has been studied before, the Frontier Fields image has unveiled new details about the cluster, Hubble officials said. The powerful space telescope caught sight of dwarf galaxies that are one one-thousandth the mass of the Milky Way, while it also found galaxies that are 100 times more massive than our home galaxy.

The detailed image could help scientists map dark matter — a mysterious substance thought to make up the bulk of the mass in the universe — by looking into the way it distorts background light.

While Hubble's Wide Field Camera 3 was trained on Abell 2744, the space telescope's Advanced Camera for Surveys was pointing at a parallel field where it saw about 10,000 galaxies in visible light, Hubble officials said.

"The Frontier Fields is an experiment; can we use Hubble’s exquisite image quality and Einstein’s theory of general relativity to search for the first galaxies?" Space Telescope Science Institute director Matt Mountain said in a statement. "With the other Great Observatories, we are undertaking an ambitious joint program to use galaxy clusters to explore the first billion years of the universe’s history."

Over the course of three years, Hubble, Chandra and Spitzer will observe six huge galaxy clusters, including Abell 2744. Hubble will train its gaze upon Abell 2744 and the parallel field again in May, but its two cameras will switch targets.