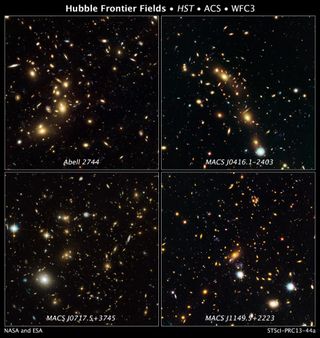 Three NASA space telescopes are teaming up to give astronomers their best-ever looks at some of the most distant objects in the universe.

The space agency's Hubble, Spitzer and Chandra space telescopes will collectively observe six huge galaxy clusters over the next three years as part of a project called The Frontier Fields. Working together, the trio should be able to spot galaxies that existed just a few hundred million years after the Big Bang created our universe 13.8 billion years ago, NASA officials said.

"The Frontier Fields program is exactly what NASA's Great Observatories were designed to do: working together to unravel the mysteries of the universe," NASA science chief John Grunsfeld said in a statement. "Each observatory collects images using different wavelengths of light, with the result that we get a much deeper understanding of the underlying physics of these celestial objects." [Cosmic View! Latest Hubble Space Telescope Photos]

The Hubble Space Telescope observes in visible, near-infrared and near-ultraviolet wavelengths. Spitzer is optimized to view in the infrared, while Chandra sees best in X-ray light.

The Frontier Fields project will take advantage of a phenomenon called gravitational lensing, in which the gravitational field of a massive foreground object bends and brightens the light from a more distant object, acting like a lens.

In this case, the six huge galaxy clusters — starting with Abell 2744, which is also known as Pandora's Cluster — will be the lenses, and the magnified objects will be extremely dim and far-flung galaxies, some of which have likely never been observed before, researchers said.

"The idea is to use nature's natural telescopes in combination with the great observatories to look much deeper than before and find the most distant and faint galaxies we can possibly see," Jennifer Lotz, a principal investigator with the Space Telescope Science Institute in Baltimore, said in a statement.

"We want to understand when and how the first stars and galaxies formed in the universe, and each great observatory gives us a different piece of the puzzle," said Peter Capak, Spitzer principal investigator for the Frontier Fields program at NASA's Spitzer Science Center at the California Institute of Technology in Pasadena.