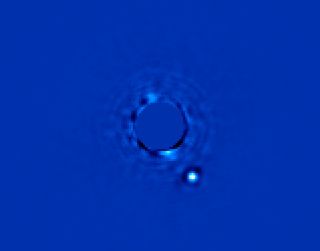 Gemini Planet Imager’s first light image of Beta Pictoris b, a planet orbiting the star Beta Pictoris. The star, Beta Pictoris, is blocked in this image by a mask so its light doesn’t interfere with the light of the planet.
(Image: © Processing by Christian Marois, NRC Canada)

WASHINGTON — Astronomers have detected nearly 1,000 planets outside of our own solar system, but little is known about their composition. Now, the Gemini Observatory's Planet Imager enables scientists to image exoplanets directly.

Current planet-imaging systems are only able to see gas giants about three or more times the size of Jupiter. NASA's Kepler space telescope has detected thousands of smaller planet candidates but cannot image these directly.

"Almost nothing is known about the composition of the planets Kepler is seeing," principal investigator Bruce MacIntosh, a physicist at Lawrence Livermore National Laboratory, said in a news conference here today (Jan. 7) at the 223rd meeting of the American Astronomical Society. "Direct imaging is offering a way to do that."

The Gemini Planet Imager (GPI), an instrument at the 8-meter Gemini South telescope in Chile, can see exoplanets in the outer solar system of young stars. Its goal is to improve the contrast of planetary imaging by an order of magnitude.

The GPI consists of a sophisticated adaptive optics system to remove the blurring effects of the atmosphere, a coronagraph that blocks starlight so planets can be seen, an infrared sensor and a spectrograph

The imager had its "first light" on Nov. 11, 2013, and has worked very smoothly, MacIntosh said. Astronomers first used it to image a planet orbiting the star Beta Pictoris. The image took only 60 seconds to capture, a process that would have taken an hour before.

The imager can also take spectra of a planet by breaking up light into its component colors, revealing the planet's composition and surface temperature. Images can also be taken in polarized light.

The GPI is eight times more sensitive than current systems, MacIntosh said. The team expects to release data publicly in February and plans to conduct a large-scale survey of exoplanets in the second half of 2014.