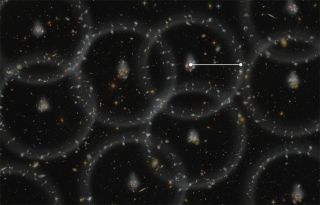 An artist's concept of the latest, highly accurate measurement of the universe from the Baryon Oscillation Spectroscopic Survey. The spheres show the current size of the "baryon acoustic oscillations" (BAOs) from the early universe, which have helped to set the distribution of galaxies that we see in the universe today. BAOs can be used as a "standard ruler" (white line) to measure the distances to all the galaxies in the universe.
(Image: © Zosia Rostomian, Lawrence Berkeley National Laboratory)

WASHINGTON — An ultraprecise new galaxy map is shedding light on the properties of dark energy, the mysterious force thought to be responsible for the universe's accelerating expansion.

A team of researchers working with the Baryon Oscillation Spectroscopic Survey (BOSS) has determined the distances to galaxies more than 6 billion light-years away to within 1 percent accuracy — an unprecedented measurement.

"There are not many things in our daily lives that we know to 1-percent accuracy," David Schlegel, a physicist at Lawrence Berkeley National Laboratory and the principal investigator of BOSS, said in a statement. "I now know the size of the universe better than I know the size of my house." [The History & Structure of the Universe (Infographic)]

Scientists working with BOSS mapped the locations of 1.2 million galaxies and found that their new measurements support the idea of the "cosmological constant" — an idea first proposed by Albert Einstein. This idea suggests that dark energy has remained constant throughout the history of the universe.

"We don’t yet understand what dark energy is, but we can measure its properties," Daniel Eisenstein, a Harvard University astronomer working with the survey, said in a statement. "Then, we compare those values to what we expect them to be, given our current understanding of the universe. The better our measurements, the more we can learn."

The new results, presented by Schlegel and his colleagues here today (Jan. 8) at the 223rd meeting of the American Astronomical Society, also provide one of the best-ever determinations of the curvature of space, researchers said. In short, the universe appears to be quite "flat," meaning that its shape can be described well by Euclidean geometry, in which straight lines are parallel and the angles in a triangle add up to 180 degrees.

"One of the reasons we care is that a flat universe has implications for whether the universe is infinite," Schlegel said. "That means — while we can't say with certainty that it will never come to an end — it's likely the universe extends forever in space and will go on forever in time. Our results are consistent with an infinite universe."

BOSS astronomers use a spectrograph on the Sloan Foundation's 2.5-meter telescope at Apache Point Observatory in New Mexico to make their observations.

"On a clear night when everything goes perfectly, we can add more than 8,000 galaxies and quasars to the map," Kaike Pan, who leads the team of observers working with the spectrograph, said in a statement.

The team has presented other results from the galaxy survey. However, the new map extends the survey's reach, more than doubling the size of the examined area and thereby allowing for more precise measurements. The newly presented data also include earlier results that surveyed nearby galaxies, BOSS officials said.

"Making these measurements at two different distances allows us to see how the expansion of the universe has changed over time, which will help us understand why it is accelerating," explained University of Portsmouth astronomer Rita Tojeiro, who co-chairs the BOSS galaxy clustering working group along with Jeremy Tinker of New York University.

The new results should help lay the foundation for even more-precise measurements in the coming years, Schlegel said.

"Future surveys will be doing more of this, both filling in this map of the universe, [and] the enormous volume of the universe we have yet to map out and doing this with even higher precision," Schlegel said here today at the AAS meeting.