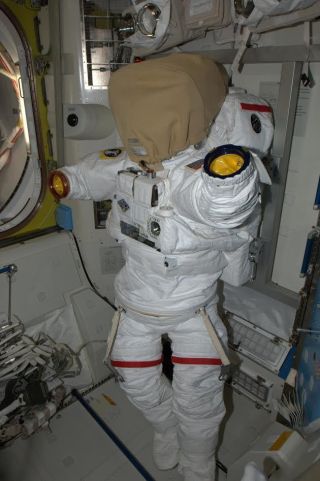 Astronaut Rick Mastracchio tweeted this photo on Dec. 17, 2013, from the International Space Station. He wrote: "Have not looked out the window in 4 days. Too busy building space suits. Where did I put my gloves? pic.twitter.com/XDqcBKl9dG"
(Image: © Rick Mastracchio (via Twitter as @AstroRM))

On Saturday morning (Dec. 21), two NASA astronauts will venture outside the International Space Station to perform the first of potentially three urgent spacewalks to fix the vital cooling system on the orbiting outpost, and you can watch the excursion live online.

NASA astronauts Mike Hopkins and Rick Mastracchio will perform the spacewalk, which is expected to begin the necessary repairs on the outside of the station. NASA TV will broadcast the entire 6.5-hour spacewalk set to begin at 7:10 a.m. EST (1210 GMT) Saturday. Coverage will begin at 6:15 a.m. EST (1115 GMT), and you can watch the spacewalk live on SPACE.com.

Mastracchio and Hopkins are leaving the confines of the station to remove and replace a failed pump module that helps keep equipment inside and outside of the space laboratory cool. The six residents of the space station are not in any immediate danger, but in order to get the station up to its fully functional status, the two astronauts will need to perform a series of quickly planned spacewalks, NASA officials said. [Photos: Astronauts Spacewalk Outside to Fix Vital Cooling System]

For this first spacewalk, Hopkins and Mastracchio will focus on preparing the failed pump module for removal and getting the replacement module — which is stored on the station's exterior — ready for installation. The next spacewalk is scheduled for Dec. 23, and a third could occur on Christmas Day (Dec. 25), if necessary.

"We refer to it as a contingency spacewalk, and the skills really are fundamental," astronaut Doug Wheelock said of the spacewalks during a NASA TV event Thursday (Dec. 19). "We practice all of these skills, just rehearse them over and over again in the pool. The crew has done these particular skills. The skills are the same, but space always has surprises for us, especially when we go outside."

In 2010, Wheelock and his fellow NASA astronaut Tracy Caldwell Dyson performed a similar series of spacewalks when they had to repair the space station's cooling system. Doug Wheelock and Caldwell Dyson have been helping Mastracchio and Hopkins prepare by running through the spacewalking plans on the ground.

"It's a little bit [of] a different failure we're facing this time around, but the spacewalks to remove the old pump module and replace it with a new spare is exactly the same as what we did in 2010," Wheelock said. "We've had a lot of lessons learned back then, and so we've implemented those changes into our procedure in the way that we prepare our suits and our tools, so we'll be ready to go on Saturday."

Veteran spacewalker Mastracchio has performed six EVAs (extra-vehicular activities, another term for spacewalks) totaling 38 hours and 30 minutes of spacewalk time. Tomorrow's spacewalk will be Hopkins' first. Japanese astronaut Kiochi Wakata will assist them from inside the station tomorrow.

Three Russian cosmonauts also live and work aboard the space station with Mastracchio, Hopkins and Wakata. Oleg Kotov, Sergey Ryazanskiy and Mikhail Tyurin round out the orbiting outpost's Expedition 38 crew.