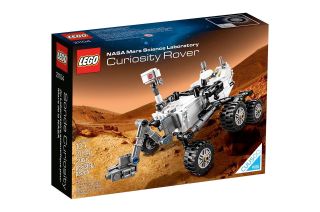 LEGO will launch its 2014 toy line with a fan-created model of NASA's Mars Curiosity rover.

The Danish toy company announced on Wednesday (Dec. 18) that its new "NASA Mars Science Laboratory Curiosity Rover" building brick set will be available for sale from the LEGO Shop online beginning Jan. 1. The 295-piece model will retail for $29.99.

"Hailed by NASA as a 'miracle of engineering' when [the real rover] landed on Mars in August 2012, we are thrilled to present a LEGO set based on this historic spacecraft," Tim Courtney, LEGO's community manager, wrote on the company's website. [LEGOs and Space: Photos of Iconic Cosmic Building Block Toys]

The Curiosity model is the fifth product to be released in the LEGO CUUSOO line of fan-designed sets.

CUUSOO, which in Japanese means "imagination" or, as it is sometimes translated, "wish," is a website that invites LEGO enthusiasts to share their ideas for new products. Visitors to the website can vote for their favorite model concepts to be considered for the next CUUSOO set.

"Stephen Pakbaz, a mechanical engineer who worked on the actual Curiosity rover at NASA's Jet Propulsion Lab [in Calif.], designed and submitted the rover project to LEGO CUUSOO in late 2011," Courtney explained. "His project reached 10,000 supporters within two weeks of the landing in August 2012, and was selected for production by the LEGO Review Board this June."

Pakbaz created the model to further educational outreach of the Curiosity mission and to encourage greater public support for space exploration.

"My hope was to have a set produced while the real rover was still active on Mars so that the model could help kids learn about the real rover's discoveries as they occurred," Pakbaz told collectSPACE in an interview last year.

On Jan. 1, the real car-sized Curiosity will be continuing its trek to the base of Mount Sharp, a towering mountain at the center of Mars' Gale Crater, where the rover landed. Curiosity should reach Mount Sharp by mid-2014, mission team members have said.

Pakbaz and LEGO created the model version of the rover to feature many of the same details as its full-size Mars Science Laboratory (MSL).

"It has a functioning rocker-bogie suspension system and fully articulated robotic arm," Pakbaz wrote in his review of the final model for LEGO's website. "It can be used to explore the unknown regions of your house or office."

"Climbing the outer walls of Carpet Crater and descending into Couch Canyon, you will finally be able to determine if your living room was ever capable of supporting microbial life!" Pakbaz exclaimed.

LEGO's Curiosity is the latest overlap between real space exploration and the iconic color bricks.

LEGO and NASA have also collaborated on a number of outreach projects, including flying minifigures to Mars and Jupiter and launching construction sets to the International Space Station.