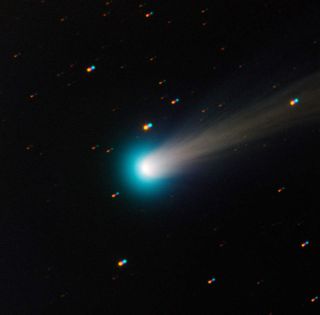 This new view of Comet C/2012 S1 (ISON) was taken with the TRAPPIST national telescope at ESO's La Silla Observatory on the morning of Nov. 15, 2013. The robotic telescope is operated from a control room in Liège, Belgium.
(Image: © TRAPPIST/E. Jehin/ESO)

The incoming Comet ISON is now in the home stretch of its long-awaited hairpin loop around the sun on Thanksgiving Day (Nov. 28), making it a great target for amateur astronomers and stargazers. But there are some tips and info you'll want to keep in mind before you go comet hunting.

Comet ISON is on track for an extremely close shave of the sun when it flies by Earth's closest star on Nov. 28. The comet will approach within a mere 730,000 miles (1.2 million kilometers) of the sun during the encounter, leading many scientists and amateur astronomers to wonder if the comet will survive its Thanksgiving Day rendezvous with the sun.

In December, Comet ISON is expected to reach its greatest brilliance. It is during that month that it will be most interesting to both amateurs and the public. [See more amazing photos of Comet ISON in the night sky]

Although forecasting the brightness of a comet months before its arrival at perihelion has always been hazardous, in the case of ISON until recently its brightening trend has been very difficult to decipher. Up until Nov. 13, the comet's increase in brightness was progressing at a rather sluggish pace, but then suddenly a noticeable outburst began taking place.

From Nov. 13 to 21, Comet ISON brightened by 3.5 magnitudes on the scale used to determine the brightness of objects in space. That's a 25-fold increase in brightness to the observer! Between Nov. 19 and 21 alone, ISON more than doubled in brightness. Along with this surge in activity, soaring rates of dust and gas were being released from its nucleus.

Amateur and professional astronomers around the world have been tracking Comet ISON in telescopes, with NASA spacecraft and other observatories tracking the object from space.

In the wake of this recent activity, experienced comet watchers are growing more confident that the comet has a chance to be ranked among one of the brightest in the last half century. "All this I regard as very promising for something quite significant to be seen from ISON come the early days of December," comet expert John Bortle said. [How to Photograph Comet ISON (Step-by-Step Gallery)]

In fact, at its very brightest Comet ISON may even become briefly visible in broad daylight!

But just how impressive the comet will look after it sweeps around the sun will be strongly dependant on where you are located. From rural areas, where the night skies are still reasonably dark, the comet could evolve into a celestial showpiece — perhaps even a showstopper. Conversely, from major metropolitan areas under urban, light polluted skies, viewers will be largely disappointed.

Skirting above a solar furnace

Comet ISON's closest approach to the sun will mark the perihelion of its orbit around the star. That will occur on Nov. 28 at 1:38 p.m. EST (1838 GMT). During the encounter, the comet will rapidly approach the sun, and its brightness will likely increase sharply. [Comet ISON's Stargazing Show: 8 Essential Facts]

It is very difficult to say precisely just how bright Comet ISON will ultimately become when it passes nearly 730,000 miles of the 11,000-degrees Fahrenheit surface of the sun, while being subjected to enormous tidal and gravitation forces that could cause the comet to fracture into pieces. If this happens, it could release a tremendous amount of dust causing the comet to become many times brighter and unfurl a tremendously bright tail.

As the comet loops around the sun, and begins its return journey out of the inner solar system, it "may" be dimly visible in daylight by merely blocking out the sun with your hand. Soon after sunrise, ISON will be positioned within about 2 degrees to the right of the sun. During the rest of the day, the comet will appear to get closer to the sun, while rapidly moving in a clockwise fashion below and then to the sun's left. The comet will appear closest to the sun just before 2 p.m. EST (1900 GMT) when it will appear less than half the apparent width of the sun from the sun's limb, or edge. The comet's velocity as it whips in a hairpin turn around the sun will reach a maximum of 234.62 miles per second or 844,632 mph (1.3 million km/h)!

We strongly warn all readers that only experienced observers should attempt observation of Comet ISON as it whips around the sun. Viewing the comet itself poses no danger, but potential danger lies in staring directly at the sun whose infrared rays can burn the retina of the eye without causing any pain. John Bortle agrees: "When it's within just a few hours of its perihelion ISON will be so close to the solar limb it will be an impossible task to spot for virtually all observers." [How to See Comet ISON in November Sky | Video]

You can safely watch the comet whip around the sun on your computer here from the Large Angle and Spectrometric Coronagraph Experiment (LASCO) on the SOHO spacecraft.  ISON should be within LASCO’s field of view from 7 a.m. EST (1200 GMT) on Nov. 27 to 7 p.m. EST on Nov. 29 (0000 Nov. 28 GMT).

Soon after perihelion, perhaps on the mornings of Nov. 29 and/or 30, the ghostly dust tail might be visible low in the eastern sky, but the comet's brilliant head will still be embedded deep in the morning twilight.

Below is a look at Comet ISON's expected behavior in the coming weeks, given in 10-day intervals.

December 1-10: The changes in the comet wrought by perihelion passage become evident. Possibly the comet is brighter than expected during the first few days of this period. On Dec. 1, the tail could be as much as 12 degrees long (your clenched fist held at arm’s length measures roughly 10 degrees).

Because of ISON's close passage to the sun, the tail could appear very bright, while the comet's head might appear zero magnitude (as bright as the stars Vega or Capella), and perhaps brighter. Each morning the tail shoots out from the head like a narrow searchlight beam and will increase conspicuously in length as ISON backs into darker morning skies. The comet's head begins to rise before the onset of morning twilight — about 100 minutes before sunrise — on Dec. 6 and the tail length reaches to perhaps 20 degrees by Dec. 10. The comet's brightness by Dec. 10 should subside to between magnitude +3 (a star of medium brightness) and +5 (a faint star); the comet will have receded to 51.4 million miles (82.7 million kilometers) from the sun.

December 11-20:Comet ISON's altitude at the break of dawn increases from 13 degrees on Dec. 11 to 22 degrees on Dec. 15. The latter date will be the last morning in December that ISON can be viewed in a completely dark sky; the bright Moon that morning sets at 5:25 a.m. local time and twilight begins at 5:33 a.m. local time. So you will have just an eight-minute window of complete darkness. The full moon of December will occur on the following day.

But within a few days, attention will shift to evening visibility as the moon will be setting about an hour later each night while the comet begins to become increasingly evident low in the northwest sky after sunset. On Dec. 20, Comet ISON sets at 6:24 p.m. local time, 14 minutes after the end of evening twilight.

Meanwhile, the distance between the Earth and comet is rapidly decreasing to 42.5 million miles (68.3 million km) by Dec. 20. The comet will be in the constellation of Corona Borealis, the brightness of the head should hover somewhere between magnitude +4 (the brightness of a moderately faint star) and +6 (a very faint star at the threshold of naked-eye visibility). By this time, the ghostly tail may appear to reach 20 degrees to 30 degrees.

December 21-31: With the moon completely absent from the evening sky and Comet ISON climbing noticeably higher in the north-northwest sky with each passing evening, the full splendor of the comet is revealed. But again we stress — observers must get away from the bright lights of cities to view the comet in all its glory — seen against a dark backdrop it could be a sight not to be forgotten.

On Christmas Day, Comet SON has moved far enough northward in declination to become a circumpolar object; that is, it does not rise nor set but remains above the horizon all night long.  The comet's closest approach to the Earth comes the following day: At 5:42 p.m. EST (2242 GMT), it will be 39,897,562 miles (64,208,902 km)away. The total light of the coma should continue to hold somewhere between magnitude +4 and +6. As seen against a very dark sky with the unaided eye, the comet’s coma may appear half the diameter of the full moon. The gas tail should span many degrees, while the much brighter dust tail will continue to stretch toward the north for at least 20 degrees — even 40 degrees is possible.

January 1-10: The rest of Comet ISON's night sky display will seem anticlimactic, for the comet shrinks and fades rapidly now as it pulls away from both the sun and the Earth, with the magnitude dropping from perhaps +6 to +8 — below the threshold of naked-eye visibility even under a dark sky. The coma is expected to be quite large and diffuse, growing more so daily. Very straight and narrow, the tail initially should be traceable some 10 degrees to 15 degrees shortening to possibly down to 5 degrees by Dec. 10. The Great Comet is now only a ghost of its former self and is best seen in binoculars.