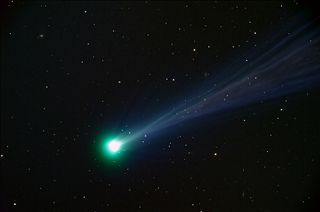 This stunning portrait of Comet ISON, officially designated as C/2012 S1, was captured by John Nassr on Nov. 15 from his Stardust Observatory in Baguio City in the Philippines. Nassr used a Nikon D7000 digital SLR camera coupled to his custom-built 16-inch f/4.5 Newtonian reflector to record the sungrazing comet’s intricate tail. The image is a combination of five 1-minute-long exposures at ISO 6400.
(Image: © John Nassr)

The incoming Comet ISON is undergoing dramatic brightening as it heads toward its Thanksgiving Day rendezvous with the sun, but if you are hoping to snap photos of the icy wanderer, you'll need to be prepared.

Officially known as C/2012 S1 (ISON), Comet ISON was discovered in September 2012 and has been billed by some as a potential "comet of the century" because of its potential to flare up into a brilliant night sky object. It is already visible to the naked eye for observers in dark-sky sites and is now sporting a long tail.

If this icy cosmic visitor survives its fiery solar encounter on Thursday (Nov. 28), when it swings within 730,000 miles (1.2 million kilometers) of the sun's surface, it could reappear in the dawn sky in early December as a potentially spectacular naked-eye object for skywatchers in the Northern Hemisphere. [See amazing photos of Comet ISON in the night sky]

But comets are notorious for their unpredictability, as shown by Comet Kohoutek C/1973 E1 in the early 1970s, which failed to meet predictions. As our good friend and famed comet discoverer David H. Levy likes to say, "Comets are like cats; they have tails, and they do precisely what they want."

This uncertainty, however, has failed to dampen the interest and excitement of the public and the media in Comet ISON. So if you want to capture your own souvenir portrait of this first-time visitor to our solar system, here are some tips to keep in mind to increase your chances of success:

WARNING:Do not attempt to observe or photograph Comet ISON when it is very close to the sun or is at perihelion. Staring directly at the sun, especially through a camera, telescope or binoculars without a proper, safe filter can result in serious eye injury or permanent blindness. No comet is worth losing your eyesight, so please be very careful!

If you want to capture detailed shots of the comet and record the full extent of its tail, you will need to use a more elaborate tracking system than the simple camera-on-tripod setup we just described, and may need binocularsor a telescope:

Assuming Comet ISON doesn't disintegrate before reaching the sun, the comet will continue on its outbound journey into deep space, never to return again for a long, long time. So don't miss this once-in-a-lifetime opportunity to catch Comet ISON now.

Editor's note:If you snap an amazing picture of Comet ISON or any other night sky view that you'd like to share for a possible story or image gallery, send photos, comments and your name and location to managing editor Tariq Malik at spacephotos@space.com.

Imelda Joson and Edwin Aguirre have been observing comets for nearly three decades. Their first book — about Halley’s Comet — was published by the National Research Council of the Philippines in 1985. Follow us @Spacedotcom, Facebook and Google+. Original article on SPACE.com.