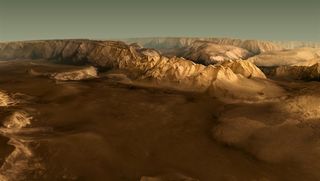 A newly released video, created by stitching together images taken by a veteran Mars spacecraft, provides a richly detailed, three-dimensional view of the Red Planet.

The European Space Agency's Mars Express spacecraft has orbited the Red Planet nearly 12,000 times, capturing images of Martian valleys, canyons and lava flows that have provided unprecedented views of planet's terrain. Researchers pieced together the individual images into a video that shows a eye-popping video of Mars in 3D.

"For the first time, we can see Mars spatially — in three dimensions," Ralf Jaumann, project manager for the Mars Express mission at the German Aerospace Center, said in a statement.

"This has enabled the creation of the most comprehensive data set that has ever been acquired by a German instrument designed to study our solar system," Jaumann said.

Nine light-sensitive detectors aboard Mars Express sweep across the surface of the planet, capturing images in sequence from nine different angles. This data is then processed into three-dimensional images by planetary researchers at the German Aerospace Center.

"We can see the entire topography almost as well as if we were standing on Mars ourselves," Jaumann said.

Researchers can use these topographical maps to study volcanism on Mars, including some of the planet's shield volcanoes in the Tharsis region that were still active just a few million years ago.

Mars Express was launched toward the Red Planet 10 years ago, on June 2, 2003. The spacecraft arrived at Mars six-and-a-half months later, and has maintained its Martian orbit ever since. The mission, which was originally planned to last for about two years (or one Martian year), is now expected to continue operating until the end of 2014.