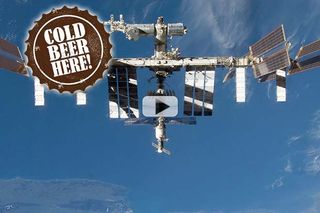 In a couple of months, the astronauts on the International Space Station will help make a cosmic brew, courtesy of a sixth grader from Colorado.

Eleven-year-old Michal Bodzianowski's microbrewery experiment, designed to test the effects of making beer in space, has won a trip to the space station, thanks to the National Center for Earth and Space Science Education's Student Spaceflight Experiments Program (SSEP). Bodzianowski's experiment, which he developed at STEM School and Academy in Highland Ranch, Colo., is slated to fly to space aboard Orbital Science's robotic Cygnus spacecraft, expected to launch in December.

The tiny brewery is set up inside a 6-inch-long (15 centimeters) tube, filled with separated hops, water, yeast and malted barley — all of the key ingredients used to make beer — and will be delivered to the station by the commercial firm NanoRacks. An astronaut aboard the station will shake up the mixture to see how the yeast interacts with the other ingredients in the beer. [Space Food Photos: What Astronauts Eat in Orbit]

"I really didn't expect this from the start," Bodzianowski told KDVR, a Fox affiliate in Denver. "I really just designed my experiment to get a good grade in my class."

It might sound like a somewhat frivolous experiment, but Bodzianowski has some good reasons for wanting to investigate the way beer can be made in space. In case of an emergency in space, alcohol is a cheap way to purify water, so figuring out a good way to make beer in space could be practical.

"Let's say it's a long-duration spaceflight and the water supply is contaminated," said Jeff Goldstein, center director for the National Center for Earth and Space Science Education and founder of SSEP. "There's no way to refresh that water by simply going back to Earth and getting some more."

"If we can create a fermentation process and water supply, that would create some level of alcohol content that could sterilize the water supply," Goldstein continued. "There was a real logic behind what he [Bodzianowski] was saying, from the standpoint of the scientific investigation proposed."

The Student Spaceflight Experiments Program was created to give students a taste of what it's like to be a scientist. Students in communities around the United States carefully craft proposals for the kinds of experiments they want to see fly to space.

Three projects from each community are chosen during the first step of the review, and a review board of spaceflight scientists, educators and engineers pick the final experiments that will fly to space.

"I think that one of the reasons why there's so much interest in this project is it's cool to think about, 'Wow, let's make beer in space,'" Goldstein told SPACE.com.

Other experiments selected to fly with Bodzianowski's microbrewery look into the developmental effects of microgravity on the spotted salamander, how microgravity changes calcium absorption in bones, crystal formation on the station and seven other selected experiments.

The SSEP just put out a call for new experiments to fly to the International Space Station for the program's sixth mission. Learn more about the opportunity on the SSEP website. Interested communities should inquire about the program on or before Oct. 31.

This is the second beer-related space news in a matter of weeks. A Delaware brewery has crafted a special beer using moon dust. The traditional German Oktoberfest beer, called "Celest-jewel-ale," is created using lunar meteorites ground into dust.