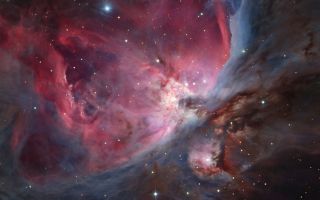 “Winner” of the Robotic Scope category in the Royal Observatory Greenwich’s Astronomy Photographer of the Year 2013 exhibition, this space wallpaper beautifully reveals the great Orion Nebula, which is often described as a ‘stellar nursery’ because of the huge number of stars which are being created within its clouds of dust and glowing gas. As dense clumps of gas collapse under their own gravity any remaining debris settles into a dark disc surrounding each newly-formed star. One of these ‘protoplanetary discs’ can be seen silhouetted against the bright background of glowing gas in the central star cluster of this image. Within the disc, material will condense still further, as planets, moons, asteroids and comets begin to form around the star. This image was released Sept. 19, 2013.