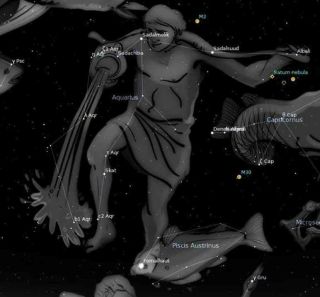 Aquarius the Water Bearer is a large but faint constellation in the Southern sky.
(Image: © Stellarium)

With a new season comes a new sky.

The passing of the autumn equinox means that the days are beginning to shorten and weather is becoming colder for people in the Northern Hemisphere, but that isn't all that's changing. Observers looking up on cool fall nights can be treated to constellations not seen every month of the year.

The traditional constellations of autumn have a rich body of lore and mythology associated with them, although there are very few bright stars in the regions that are currently spread across the southern skies during the evening hours. Little can be seen there when the sky is hazy or flooded with moonlight, but since the moon arrived at full phase last Thursday (Sept. 19) and is now setting later, the evening sky is getting darker. [See Amazing Photos of the Full Harvest Moon]

On clear moonless evenings this week, you will find some interesting constellations, though their figures are all rather dim. This whole area can be called the "watery" part of the sky because it is dim, or "like a dark pool," as Guy Ottewell, editor of the annual Astronomical Calendar noted.

At one time, these watery constellations — Capricornus, the Sea-Goat; Aquarius, the Water Bearer; Pisces, the Fishes; Piscis Austrinus, the Southern Fish; Cetus, the Whale; and finally Eridanus, the River — might have symbolized the rainy season.

There is also a mythological connection between these star pictures and an ancient great flood in the Tigris-Euphrates basin. It isdifficult to say for sure, however, because the original significance of many starry figures was lost when the Greeks recast the display with characters of their own legends.

Among these "watery" constellations is the Water Bearer, Aquarius. This week, the famous constellation is in a commanding location in the southeast sky at around 9 p.m. local time.

The rich mythology of Aquarius is very ancient, tracing back to the earliest civilizations in the Tigris and Euphrates valleys. In fact, on some of their cylinder seals, these ancient peoples pictured these rivers as pouring out from Aquarius' water jar.

The ancient Egyptians had an equally picturesque image of this constellation. They associated Aquarius with the Nile's annual flooding, which far from being disastrous, added a new layer each year to the valley's fertile soil. The Egyptians believed the flooding was caused by Aquarius dipping his water jar into the river to refill it.

We might even go so far as to refer to Aquarius as the "Gunga Din" of the sky. In 1892, Rudyard Kipling wrote a poem about Gunga Din, a traditional native water carrier of South Asia also known as a Bhishti.  Unlike Aquarius, who poured water from a jar, the Bhishti poured their water from a goat-skin bag known as the mashk or mashq.

Quite a number of Aquarius' stars have proper names. The names Sadalmelik, Sadalsund, Sadachbia, and Albali all indicate in Arabic that these are "lucky" stars astrologically.  Skat means the lower foot in Arabic, while Ancha comes from Medieval Latin, referring to the upper thigh or hip.

We're in the wrong age

In April 1968, the musical "Hair" opened on Broadway and popularized this constellation in the song "Aquarius" which spoke of the "dawning of the age of Aquarius."

The naming of an "age" comes from a cabalistic tradition referring to a period in which the vernal equinox lies inside a specific constellation. The vernal equinox — the place where the sun appears on the first day of spring — appears to move slowly westward against the background stars, taking 25,700 years for one trip.

At the time of Ptolemy (150 B.C.), the sun entered Aries on the first day of spring. The vernal equinox, although illogically still called "the first point of Aries," and marked with a symbol resembling the horns of a ram, is now located in Pisces, technically putting us in the Piscean Age.

According to modern constellation boundaries, the Age of Aquarius will not dawn until the year 2599.