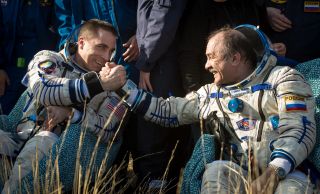 NASA astronaut Chris Cassidy just landed back on Earth last week after spending more than five months aboard the International Space Station. SPACE.com will have a chance to chat with Cassidy on Thursday (Sept. 19) afternoon and we want to know, what would you ask him?

A Russian Soyuz spacecraft safely returned Cassidy and two cosmonauts to the planet on the morning of Sept. 11 in Kazakhstan. Now back in the United States, Cassidy will be fielding questions from reporters about his mission, in which he performed three spacewalks, worked on hundreds of science experiments and showed how to shave your head in space.

I'll get to talk to him briefly over Skype and I'd like to ask some questions from SPACE.com readers, so please tell us what you're dying to know in the comments below or in a tweet (@meganigannon).

Cassidy's trek to the orbiting outpost was his second spaceflight. In 2009, he was part of NASA's two-week-long STS-127 mission on the space shuttle Endeavour. The astronaut is from York, Maine, where he lives with three children and his wife Julie. He served as a Navy SEAL for 10 years before joining NASA's astronaut corps in 2004 and is also a commander in the U.S. Navy.