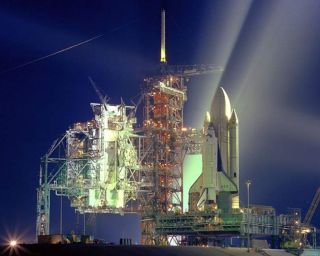 A timed exposure of the Space Shuttle, STS-1, at Launch Pad A, Complex 39, turns the space vehicle and support facilities into a night-time beacon of spaceflight. Structures to the left of the Shuttle are the fixed and the rotating service structure.
(Image: © NASA/KSC. Click to elarge.)

As NASAmarks 25 yearsof shuttle flight this week, the space agency is looking ahead to its nextspaceship to reach for the orbit and the Moon.

The spaceshuttle Columbia ushered in NASA's shuttle era on April 12, 1981, when it launchedspaceward with STS-1 astronauts John Youngand RobertCrippen aboard.

A quartercentury later, NASA's aging shuttle fleet is destined for retirementin 2010 as the space agency returns to a capsule-basedspaceflight with its $104-billion Crew ExplorationVehicle (CEV) plan. The agency's new spaceship to is expected to debut nolater than 2014 to serve the International Space Station (ISS) , and pushtowards the Moon and possibly on the Mars.

"Theshuttle was a 'do everything for everybody' vehicle," Scott Horowitz, NASA'sassociate administrator for the agency's Exploration Systems MissionDirectorate, told SPACE.com. "Webuilt a reusable spacecraft, which had never been done before. But it was moredifficult to do than many people imagined."

"Theshuttle showed us how to operate routinely in space and reaffirmed that goinginto [orbit] is difficult," he added.

NASA'sbiggest lesson from its 114 shuttle flights - which it learned the hard waythrough accidents and sacrifice - has been the need for a quick and dependable way out forastronauts in case of a launch or landing emergency.

"We learnedwe need to have a dedicated vehicle to launch crew with a robust escapesystem," Horowitz said.

DuringColumbia's STS-1 mission and three subsequent test flights, all of which wereflown by two-astronaut crews, the orbiter carried ejection seats for commanderand pilot should they need to bail out of the vehicle - after first blowing theroof off the cockpit - at key moments. A bailout escape system was installed on shuttle middecksfollowing the Challenger accident.

"Truthfully,I'm not sure that they could have handled many contingencies," Crippen told SPACE.comof the ejection seats, adding that it's unlikely they could have handledextreme failures like the Columbia or Challenger incidents.  "With this[new] vehicle, we'll be able to put in an escape system that we weren't able todo with shuttle."

"We do knowthat those launch escape systems work," said Roger Launius,a former NASA historian and chair of the Division ofSpace History at the Smithsonian Institution's National Air and Space Museum inWashington, D.C. "We tested them unmanned on Mercury and Apollo, and theRussians have aborted twice in launches and succeeded in bringing the crewback."

"We alwaysworried most about those and blowing the back end offthe ship," former astronaut Tom Jones, a four-flight shuttle veteran, told SPACE.com. "If you had an engine explodeon the way to orbit, it would probably have damaged the orbiter to the pointthat it couldn't return safely, and then the crew is lost."

With thecapsule on top, the astronauts need not worry about foaminsulation or other debris striking their spacecraft during launch, Jonessaid.

"We can atleast look at the way the shuttle was fatally flawed, and make the CEVbulletproof to those threats," he added.

The shiftback to an Apollo-like capsule spacecraft will borrow from NASA's shuttleexperience, NASA officials said. The agency plans to draw on its shuttle solidrocket boosters and external tanks to construct separate CEVcrew and cargo launchers, they added.

But inreturn for the new system, NASA is trading the substantial performancecapabilities of its shuttles, which have allowed astronauts to assemble theISS, as well as repair satellites and the HubbleSpace Telescope in orbit. The shuttle is also able to return tons ofhardware to Earth from the ISS, with much of its flexibility stemming from itscatch-all design.

"It's aremarkable vehicle [and] it does things that no other vehicle has ever done,and may not do for awhile," NASA shuttle program manager Wayne Hale said in aninterview. "It has its limitations and we, as a spacefaringpeople, should have been building the nextgeneration shuttle long ago...I think it will be well past time for theshuttle to retire when we roll it into the Smithsonian."

Launius,however, said he is concerned that NASA may spend years developing the CEV,only to be stymied after the shuttle is retired and be effectively left withouta dedicated human spaceflight capability.

"The landscaperight now is littered with would-be shuttle replacement programs," Launius said, referring to past NASA projects like the NationalAerospace Plane, the OrbitalSpace Plane, the X-34 and others."Each of those projects ran aground for a variety of reasons, usuallytechnological or financial...and in each of those terms they hit the resetbutton."

Thechallenges, Launius said, are very real for NASA'sCEV, which the space agency hopes to launch no later than 2014.

"I hopethey're able to move forward with CEV and bring it online," he said.