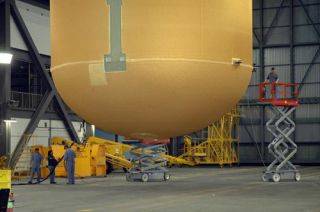 CAPE CANAVERAL - KennedySpace Center technicians will take on a lengthy and unusual job today, one aimedat getting inside a shuttle external tank to swap out suspect fuel sensors.

AMarch 14 decision to replacefour fuel-depletion sensors in the bottom of the tank prompted NASA todelay the planned launch of its secondpost-Columbia shuttle mission from May to July.

The sensors serve the samepurpose as automobile fuel gauges and also provide a backup means of makingsure the shuttle's three liquid-fueled main engines shut down properly inflight. A malfunction could prompt a premature shutdown, which could lead to arisky and unprecedented emergency-landing attempt.

Technicians have builtscaffolding that will provide a work platform beneath the dome-shaped bottom ofthe tank. A makeshift clean room also was put in place to make certain no dirtor other contaminants get inside the tank.

The replacement work willbegin today as technicians start to remove foam insulation from a 3-foot-wide(about one-meter) manhole cover bolted on the bottom of the tank. Later thisweek, the cover will be taken off and a technician will climb inside.

The four sensors are on abracket attached to an internal shock mount that crisscrosses the bottom of thetank. The technician will remove the bracket, replace it and then exit thetank.

After the manhole cover isbolted back in place, the tank will be hoisted out of the checkout cell andonto a horizontal transporter in the center aisle of the assembly building.

The move will enabletechnicians to reapply foam insulation on the bottom of the tank, a lengthyprocess that involves spraying several layers of liquid foam and allowing eachto harden.

All in all, the sensor swapis expected to take about 22 days.

"It takes time,"Chapman said. "But it's a straight-forward process."

The change-out work will befollowed by the mating of the tank to a pair of 149-foot (45-meter) tall solid rocketboosters that already are stacked on a mobile launcher platform in the assemblybuilding. The orbiter Discovery will be connected to the tank late next month.