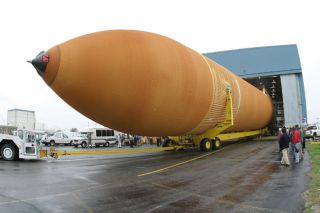 Theexternal tank that will fuel NASA's next space shuttle during launch arrived atthe agency's Florida spaceport late Wednesday after a five-day trip along the Gulf Coast.

NASA'sPegasus barge delivered the Lockheed Martin-built ExternalTank-119 (ET-119) at Kennedy Space Center (KSC) in Cape Canaveral, where itwill be used to fuel the Discovery shuttle's launch during the upcoming STS-121spaceflight later this year.

The arrivalof the 15-story, orange tank, which holds theliquid oxygen and liquid hydrogen propellant that fuel a shuttle's main enginesduring liftoff, brings all of the necessary components for Discovery's STS-121mission to KSC.

Discoveryitself sits in its Orbiter Processing Facility, where engineers are working toprepare it for flight. The shuttle's twin solid rocket boosters, which stand toeither side of the external tank during launch, are being assembled in themassive, 52-story Vehicle Assembly Building where ET-119 now sits.

NASA hopesto launch ET-119 and the STS-121 mission, commanded by veteran astronaut StevenLindsey, as early as May 10, though an official flight date has yet to beset. The mission, NASA's second test flight following the 2003 Columbia disaster, willtest orbiter inspection methods, heat shield repair techniques, and delivervital supplies to the International Space Station (ISS).

The missionis also expected to deliver a third space station crewmember - the EuropeanSpace Agency (ESA) astronaut ThomasReiter - to return the ISS to a three-person crew.

ET-119'sarrival at KSC is the culmination of months of hard work, especially forLockheed Martin employees at NASA's Michoud Assembly Facility in New Orleans,Louisiana, who prepared the shuttle fuel tank while simultaneously recoveringfrom the effects of Hurricane Katrina. The hurricane devastated the Gulf Coastin September 2005, causing widespread flooding and damage that left manyhomeless.

"Theworkforce there is really proud of what they've done," NASA shuttle programmanager Wayne Hale said of the Michoud workers Tuesday during a pressconference. "My hat is off to them."

NASA hopesthat external tank wind tunnel tests will prove that pressure and fuel linesonce covered by the removed ramp can withstand the stresses of launch.

"The thingthat's going to pace getting Discovery off the ground is not the work we'redoing at the Kennedy Space Center," Hale added. "It is the engineering analysisand tests that go toward proving what we have assembled is safe to fly."