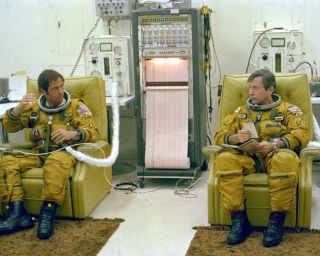 STS-1 astronauts Robert Crippen (left) and John Young (right) discuss checklist items during suit-up in the Operations and Checkout Building prior to departure for the launch pad during the final countdown rehearsal before launch.
(Image: © NASA.)

Twenty-fiveyears ago this week, NASA launchedtwo astronauts into orbit aboard the first flight of the Columbia spaceshuttle.

But onApril 12, 1981 when Columbia first left Earth, those two test pilots - STS-1commander JohnYoung and pilot RobertCrippen - carried with them the hopes of thousands of engineers, designers,flight controllers and spaceflight supporters eager for a new U.S. crewedspacecraft.

"There wereliterally tens of thousands of people that were involved," said Crippen as helooked back on STS-1's morning launch, which marked his first spaceflight. "Johnand I just got to do the best part."

"It was atotally different machine from what we were flying before," said Young, whoflew aboard NASA's Gemini and Apollo vehicles before STS-1, in an interview. "Wehad about 23 guys in the Astronaut Office and they would have all killed to beon that first flight."

SinceColumbia's STS-1 flight, NASA has launched 113 space shuttle missions with itsorbiter fleet filled out by the Challenger, Atlantis, Discovery and Endeavourvehicles. NASA honored its STS-1 astronauts by renaming the launch firing room used for their flight the Young Crippen Firing Room on Thursday.

"It's stilla risky business," Young said. "The shuttle has a proven one in 57 failurerate."

During the1970s, NASA tapped Rockwell International - now part of Boeing - as primarycontractor for the orbiter system, where engineers worked feverishly to readythe spacecraft for flight.

"It was anextremely busy time," said Dwight Woolhouse, Boeing's associate programdirector for orbiter development, who served as aerosurfaces subsystem managerfor Columbia's first flight. "Even up to a couple of months before that firstflight we were still immersed in hardware tests. And yet, everybody really hadthis attitude that we were going to find a way to make this work."

Columbiawas heavier than its younger shuttle brethren, each of which weigh about 100tons, by about 5,000 pounds (2,267kilograms) since designers had yet to learnwhere other weight savings could be made, its builders said.

The push touse the spacecraft not only to launch astronauts and large satellites or othercargo in its school bus-sized payload bay, as well as the thousands of ceramictiles that protected the orbiter from the intense heat of reentry, led to anincreasing complexity that not only required everything to work properly for asafe flight, but also lengthened shuttle turnaround for future missions.

"There'ssomething like 43 independent major subsystems that must work perfectly for aflight," said Bo Bejmuk, Boeing's current orbiter program director who watchedColumbia launch on its STS-1 mission as a freshly-appointed system integrationmanager. "I was a much younger guy then. And you sit there and you see thecountdown and you see John Young's face during the traditional [pre-launch]breakfast and you say 'My God, I hope we were exactly right.'"

For Bejmuk,watching Columbia rocket into orbit in 1981 gave more than just a sense ofaccomplishment of helping to fly NASA's first orbital space plane.

"I feltlike NASA gave me an incredible birthday present," Bejmuk said, adding that his41st birthday coincided with STS-1's first flight. "I had plenty ofanxiety in my stomach."

"We wentoff console to go home and try to get some sleep, which of course wasimpossible," Hale, who served as a consumables analyst for the flight, told SPACE.com."We ended up watching it on television, which just astounded me. The launch ofa shuttle is so different from other vehicles. It has a lot of get up and go."

"There area lot of us, I think, who would pay to sweep out the floors around here,because [spaceflight] is what we want to do," Hale said.

"During theflight, it was pretty busy, but it was still a fantastic thing," Crippen said,adding that as a first-time spaceflyer, the chance to ride with Young - whowalked on the Moon during NASA's Apollo 16 mission - was a bonus. "When you'redoing it for the first time, it's nice to do it with an old pro."

The STS-1crew returned to Earth on April 14, rolling to a stop on a desert runway atEdwards Air Force Base and paving the way for 292 other astronauts andcosmonauts to join Young and Crippen in the ranks of shuttle flyers.

Planetaryscientist Tom Jones, a veteran of four shuttle flights, flew aboard Columbia in1996, using its robotic arm to deploy a pair of science satellites during theSTS-80 mission.

"I got goosebumps crawling into the shuttle knowing that it was the same space ship thatflew John Young and Bob Crippen on their first flight," said Jones, who alsoflew aboard Atlantis and Endeavour, NASA's youngest orbiter. "If you lookedcarefully, out of the corner of your eye, in the cockpit, you'd be able to tellyou were aboard Columbia because of it had some extra panels and switches thatlater orbiters didn't have.

"And you'dnotice the little scuffs on the walls, and the sort of touch-up paint from itslong service," Jones said of Columbia, adding that the memory of the 2003accident that destroyed the orbiter and killed seven of his fellow astronautsis still strong. "It still bothers me that that my spaceship that was lost andmy friends that were lost. It's always going to leave a hole in my heart whenthe shuttles are retired and I go to the museum and it's not there."

Throughoutits 22-year service, Columbia launched into orbit on 28 missions, all but onereturned to home safely.

"I have adeep sense of gratitude," Jones said, adding that it is people - not hardware-that made Columbia first flight and all shuttle missions possible. "You neverget a chance to see them and thank them for all their work."