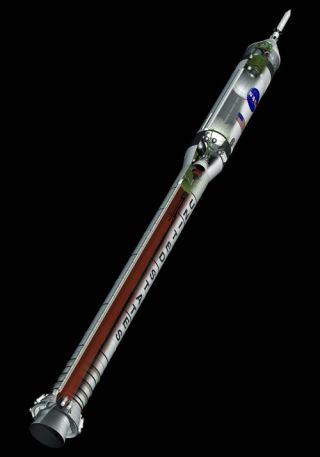 Despite a stalled space shuttle program, NASA is confident it can launch and sustain human exploration of the Moon by 2018, the space agency's top official said Monday.

The $104-billion plan calls for an Apollo-like vehicle to carry crews of up to four astronauts to the Moon for seven-day stays on the lunar surface. The spacecraft, NASA's Crew Exploration Vehicle (CEV), could even carry six-astronaut crews to the International Space Station (ISS) or fly automated resupply shipments as needed, NASA chief Michael Griffin said.

"Think of it as Apollo on steroids," Griffin said as he unveiled the agency's lunar exploration plan during a much-anticipated press conference at its Washington, D.C.-based headquarters. "Unless the U.S. wants to get out of manned spaceflight completely, this is the vehicle we need to be building."

He dismissed suggestions that reconstruction of the Gulf Coast in the wake of Hurricane Katrina might derail the program first outlined by President Bush in 2004.

"We're talking about returning to the Moon in 2018. There will be a lot more hurricanes and a lot more other natural disasters to befall the United States and the world in that time, I hope none worse than Katrina."

NASA's space shuttle program is set to retire in 2010, with the first CEV launch targeted for no later than 2014, though an internal deadline is tentatively set for 2012, Griffin said. The 2012 launch and 2018 Moon landing targets should allow NASA to achieve the space vision laid out by President George W. Bush in 2004, which called for a return of humans to the Moon by no later than 2020, Griffin added.

The vision set by Bush also called for NASA to refocus its sights on future manned missions to Mars. Griffin said that the fundamental technologies planned for lunar exploration may also be repurposed for future Mars missions.

"We started with the requirement to see what we had to do for Mars, and worked backward," he said.

Capped with an escape tower, the capsule would launch atop an in-line booster and rendezvous with an Earth Departure Stage and lunar lander in Earth orbit, which themselves would launch atop a separate, heavy-lift rocket. Both launchers will be derived from external tank, shuttle engine and solid rocket booster technology developed for the orbiter program, with power for the CEV to be provided via solar arrays.

"What we're really developing is the shuttle's successor," Griffin said. "The CEV is designed to go to low-Earth orbit."

Once in orbit, the spacecraft could link up with other, mission-specific vehicles and push on toward the Moon, Mars or service the Hubble Space Telescope, Griffin said.

"You can do anything," he added.

The crew capsule's location and escape tower should make the spacecraft about 10 times safer than NASA's space shuttle launch system, with a projected failure rate of 1 in 2,000 instead of the 1 in 220 rate set for the shuttle. With the 1986 loss of the space shuttle Challenger and the 2003 Columbia accident, NASA has lost two orbiters and 14 astronauts on 114 flights.

Like the Apollo missions, the CEV capsule would jettison its service module and return to Earth under parachutes, but will also use airbag cushions, retrorockets or other means to land on the ground at a West Coast location. Apollo astronauts landed at sea.

"It needs to land on the west coast of some country because we want the service module to land in the ocean," Griffin said, adding that while touchdowns at California's Edwards Air Force Base are under review, a water landing is also possible.

At least two Moon missions per year are projected once the program gets started, Griffin said.

While the initial lunar journeys under the new program would place astronauts on the lunar surface for a maximum of seven days, future expeditions could last up to six months, akin to flights now conducted by space station astronauts, Griffin said.

NASA's Apollo program landed two astronauts on the lunar surface while a third orbited the Moon. Under the space agency's new plan, all four astronauts would make the lunar descent and explore the surface.

"So we get at least double the amount of time [on the Moon] with seven-day missions and four times the amount of lunar surface crew hours," Griffin said, comparing the planned lunar missions to their Apollo predecessors.

Also unlike the Apollo flights, which were largely confined to the Moon's equatorial regions, CEV missions could reach any point on the Moon that promised interesting science, Griffin said.

"This architecture allows us global lunar access," Griffin said. "Many of the most interesting places [on the Moon] are situated well off the equator."

Researchers have identified locations of possible water ice near the lunar poles. The ice could provide drinking water and fuel for return trips.

The architecture unveiled Monday will be forwarded to two competing aerospace teams vying for NASA's CEV contract - Lockheed Martin and the team-up of Northrop Grumman and Boeing -- to and allow them to further refine their proposals, Griffin said.

"That really helps us to get started working on the details," Keith Reiley, CEV deputy program manager for the Northrop Grumman-Boeing team, told SPACE.com after the announcement. "It's very similar to all the things we've been working on."

Lockheed Martin's Michael Coats, vice president and deputy for space exploration, told SPACE.com that before today's announcement, Griffin made it clear that NASA will be looking for the competing contractors to show innovation in subsystems and in ways to reduce costs.

"It's clear, from what we saw today, what [NASA is] asking for," Coats added.

Reiley added that while his team had an idea of what NASA was looking for in the shuttle replacement, some of the functionality requirements between the CEV and its accompanying spacecraft -- such as the lunar lander -- are now clearer.

NASA culled the field of potential CEV contractors down to the two teams in June 2005, and will make a call for improvements from Lockheed Martin and the Northrop Grumman-Boeing team later this year, NASA officials said.

"We've got a lot of work ahead," Reiley said.