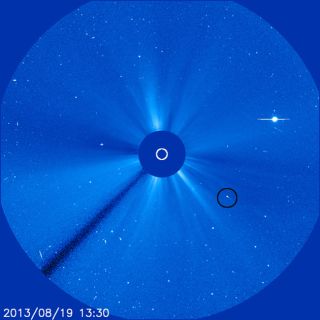 The Solar and Heliospheric Observatory spacecraft captured this view of a small comet (circled) zooming toward the sun on Aug. 19, 2013.
(Image: © SOHO/NASA-ESA)

A small comet dove headlong toward the sun this week in a cosmic death-dive captured on camera by a spacecraft — an opening act of sorts for the highly anticipated close solar approach of another comet, Comet ISON, in a few months' time.

The minuscule and apparently nameless comet was captured barreling toward our star Monday (Aug. 19) by the Solar and Heliospheric Observatory (SOHO) spacecraft operated by NASA and the European Space Agency. Scientists created of video of the comet's dive toward the sun using the SOHO images.

The little comet failed to emerge on the other side of the sun. It never had a chance, experts said.

"With a diameter of perhaps a few tens of meters, this comet was clearly far too small to survive the intense bombardment of solar radiation," Karl Battams of the U.S. Naval Research Lab, who studies sungrazing comets, told SpaceWeather.com today (Aug. 20).

The suicidal comet likely belongs to a group of comets known as Kreutz sungrazers. These comets, whose orbits bring them extremely close to the sun, are believed to be the remains of one giant comet that broke apart several centuries ago. They are named after the 19th century German astronomer Heinrich Kreutz, who first demonstrated that such comets are related.

"Several Kreutz fragments pass by the sun and disintegrate every day," SpaceWeather.com reported. "Most, measuring less than a few meters across, are too small to see, but occasionally a bigger fragment like this one attracts attention."

Comet ISON, while a sungrazer, is not a member of the Kreutz group. ISON is slated to skim just 724,000 miles (1.16 million kilometers) above the solar surface on Nov. 28, and experts have said the comet could potentially put on a spectacular show in the night sky shortly thereafter.

Comet ISON has thus been pegged as a potential "comet of the century" candidate. But the early signs are that it may not live up to the hype.

ISON, which was discovered in September 2012, became lost in the sun's glare in early June of this year. When it popped back into view a few days ago, it was substantially dimmer than experts had predicted and skywatchers had hoped.

"That the comet continues to appear as faint as it does implies that its intrinsic brightness (absolute magnitude) is low and that the nucleus is probably small and relatively inactive," well-known comet observer John Bortle told SPACE.com last week.

Still, nobody really knows how ISON will behave during its close solar approach. Experts will continue to refine their predictions as more observations of the comet come in from telescopes on the ground and in space.