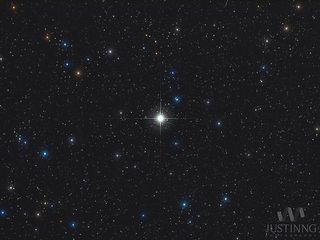 Photographer Justin Ng photographed Nova Delphinus 2013 on August 18, 2013. He is based in Singapore.
(Image: © Justin Ng)

A new star explosion in the night sky, called a nova, is captivating stargazers around the world and is now visible to the naked eye, weather and light conditions permitting. Today (Aug. 19), you can catch live views of the nova in an online webcast.

The new Nova Delphinus 2013 star explosion was discovered last week by Japanese amateur astronomer Koichi Itagaki. He spotted the nova (Latin for "new star") on Aug. 14 while observing the constellation Delphinus (The Dolphin) through a telescope.

The online Virtual Telescope Project in Italy will webcast live views of Nova Delphinus today at 4 p.m. EDT (2000 GMT). You can watch the live nova webcast on SPACE.com here, courtesy of the Virtual Telescope. [See photos and sky maps of the new nova star explosion]

Astronomers measure the brightness of night sky objects as magnitude, in which brighter objects are given lower numbers. Negative numbers denote exceptionally bright objects, such as the moon.

When Nova Delphinus 2013 was first discovered, its magnitude was estimated to be about +6.8. That placed the nova's brightness at just beyond what can be seen with the naked eye, which is designated as a magnitude of +6.5. The nova was still visible in binoculars and telescopes, however.

By Friday, however, the situation had changed. The nova had brightened to a magnitude +4.5, placing it within naked-eye observing range. Masi suspects Nova Delphinus' current brightness is about the maximum level it is going to reach, but that hasn't kept stargazers from marveling at the stellar spectacle.

The nova is "hard to see naked eye unless you are in a very dark sky and know exactly where to look," veteran astrophotographer and skywatcher John Chumack wrote in an email. "But this is a very bright nova, most don’t get above 8th magnitude."

A nova is a star explosion that scientist think occurs when a white dwarf star in a binary system strips material from its partner star, which over time triggers a massive outburst. Unlike supernovas, which are catastrophic explosions that signal the death of a star, novas do not destroy their stars. Novas are not as bright as supernovas, which can be so brilliant they can temporarily shine with the brightness of 100 billion normal stars.

Novas bright enough to be seen with the naked eye typically occur about once or twice a decade, according to Joe Rao, SPACE.com's skywatching columnist. The brightest nova within the last 50 years occurred in August 1975 when a star explosion was spotted in the constellation Cygnus (The Swan) and reached a maximum brightness of about +1.8 (the brightness equivalent of Polaris, the North Star).

Here are some tips on how to see Nova Dephinus 2013:

The nova is located inside the small constellation Delphinus, the Dolphin, which can be found near the famed Summer Triangle made by the bright stars Vega, Altair and Deneb. Delphinus is a small diamond-shaped star pattern made up of four moderately dim stars.

In late evening, Delphinus is currently visible high in the southeast sky. By midnight, local time, the constellation is about two-thirds of the way up from the southern horizon.

Editor's Note: If you snap an amazing picture of the new nova star explosion, or any other night sky view that you'd like to share for a possible story or image gallery, send photos, comments and your name and location to managing editor Tariq Malik at spacephotos@space.com.