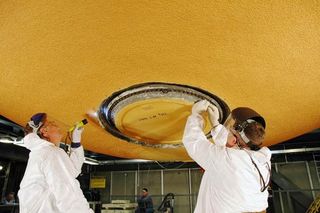 Lockheed Martin technicians from NASA's Michoud Assembly Facility in Louisiana inspect and clean the area around the "manhole" on the external tank designated for mission STS-121.
(Image: © NASA/Jim Grossman.)

They were preparing toreplace a gaseous oxygen vent valve near the nose and were repositioning ahalogen lamp when it hit the tank, causing "extremely minor" damageto the insulating foam, NASA spokeswoman Jessica Rye said.

The workers are from theLockheed Martin-run Michoud Assembly Facility in New Orleans, which makes theexternal tanks.

Work at the top is on hold.

"We're in the processof completing a detailed inspection of the area before we'd be able todetermine what, if any, repairs are required," Michoud spokesman MarionLaNasa said.

"We have a significantamount of experience repairing damage in this area of the ET."

Last year, he said, birdsdamaged foam near the nose of a tank, and the foam was repaired, though thattank didn't fly for other reasons.

"We don't think thisis going to be any impact or concern at this point," Rye said.

There are two currentinvestigations into recent accidents at KSC. In one, a construction worker fell off a roofand died from his injuries.

In another, a shuttle robot arm wasdinged.