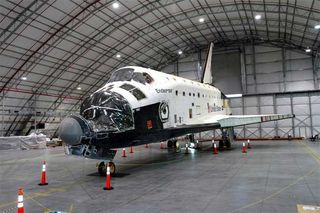 CAPE CANAVERAL - NASA halted shuttle launchpreparations at Kennedy Space Center on Thursday so workers couldcontemplate a rash of recent accidents, including one that the center directorsaid could have been disastrous.

One recent close call couldhave done "major damage" to Endeavour, and another incident -- asmall fire at the Vehicle Assembly Building -- "could have beencatastrophic," Kennedy said.

"We must stop, intheir tracks, the chain of events that led me to call for this safetystand-down," he added.

Last week, workersinadvertently started a small fire during roof repairs to the 52-story assemblybuilding. Two fully fueled shuttle solid rocket boosters were stacked on amobile launcher platform in the building at the time.

Had the fire reached fullyfueled rocket segments it could have prompted a major explosion.

Workers had not locked downthe orbiter's nosewheel landing gear, and the ship pitched forward when theweight was shifted. The movement was stopped before serious damage could bedone to the underside of the orbiter, which is covered with fragile heat-shieldtiles.

NASA has found no commoncause for the incidents.

"However, I consideredall a threat to successfully accomplishing our mission -- the launching ofastronauts and payloads into space," Kennedy said.

Kennedy noted KSC workersare responsible for the safety of fellow employees as well as astronaut crews,and he made reference to the 1967 Apollo 1 fire and the shuttle Challenger and Columbia accidents in 1986 and 2003,respectively. Seventeen astronauts died in the accidents.

He also reminded workersthat KSC is the only U.S. government spaceport capable oflaunching humans into orbit, and its facilities are critical to the future ofAmerican human spaceflight.

"We understand thatincidents may occur, but a major mishap could result in losing the confidenceof the American people," Kennedy said.

And that, he added,"could derail NASA's plans to complete the International Space Station andbegin exploration of the moon, Mars and beyond."