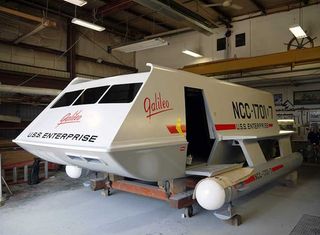 After close to 50 years in disarray, an iconic piece of restored "Star Trek" memorabilia is about to boldly go on display in its new home.

The Galileo's restorer, "Star Trek" superfan Adam Schneider, thinks that the space center — which is next to NASA's home base for Mission Control and the astronaut corps. — is the ideal place for the shuttlecraft. [See Photos of the restored Shuttlecraft Galileo (Gallery)]

"If somebody told me when I was a little kid that I'd be donating a spaceship to NASA, I would have said that they were kidding," Schneider, whose restoration took about nine months, told SPACE.com. "How does it feel? It feels amazing. It almost feels like it's all downhill from here because this is such a high. It feels truly like a success."

The Galileo's road to Houston has been a long one. Before Schneider won it at auction in June 2012, the shuttlecraft was in shambles. Schneider and his wife Leslie employed the help of craftsman Hans Mikaitis and his team of ship restorers at Master Shipwrights in Atlantic Highlands, N.J. to help return the shuttlecraft to its former glory.

The finished 23 foot (7 meter) long Galileo was revealed for the first time in late June before a crowd of more than 350 "Star Trek" fans and friends of the restorers before being shipped via truck to Texas for tomorrow's opening.

"The life-size spaceship will be on permanent display inside the Zero-G Diner and will be one of the few exhibitions in the world where visitors can see iconic sci-fi history that influenced generations of innovators," officials from Space Center Houston wrote on the center's website.

Space Center Houston will host a public event in honor of the arrival of Galileo on Wednesday. A celebrity panel will discuss the influence of science fiction on space exploration and an astronaut will make a presentation.

According to the visitor's center, celebrity guests will include:

"Like any good project, when it ends you're a little regretful because the experience was positive," Schneider said. "We had fabulous people to work with. We had a fabulous experience in the 'Star Trek' community, so I think we're a little sad and regretful that it's over at one level. On another level, this is a permanent addition to the fan base, so to speak, and we're really very proud that it actually is going where it's going."