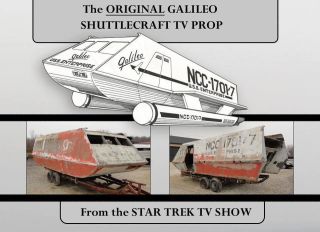 Two "Star Trek" fans are a couple of weeks away from fully restoring the last surviving large set piece from the venerable 1960s TV show.

Adam Schneider and Alec Peters are refurbishing the 24-foot (7.3 meter) long Shuttlecraft Galileo used to shuttle the crew of the Starship Enterprise back and forth from the ship.

SPACE.com spoke with Schneider and Peters about the restoration, the American space program and what "Star Trek" means to them. [See Photos of the Galileo Restoration ]

SPACE.com: First of all, what makes Galileo important in the "Star Trek" universe?

Adam Schneider: "Star Trek" was the first show with a really giant ship, and they never wanted it to land basically for budget concerns. But after a while they realized that it was dramatically useful to have a piece that could land, be separate and get into trouble, get destroyed, injure people, have crash landings, all the stuff that happens you can't do to the big ship because then the show's over. So they invented the idea of a shuttlecraft [Galileo]. They used it to be able to show a limited number of people away and in trouble.

SPACE.com: You won the Galileo at auction in 2012. Why restore it?

Schneider: We can't think of a more important science fiction related to manned space travel piece out in the wild. This thing was in abysmal condition for a long time and I'm known as the guy who gets spaceships and restores them. I kind of felt it was a bit of a public interest to bring it back to life and to donate it to hopefully a world class facility that respects it and uses it for further education both in the entertainment business of science fiction and real world space travel.

SPACE.com: What was the state of the shuttlecraft when you won it?

Peters: When we actually went to look at it after winning, it very obviously didn't look anything like the television prop. It really needed to be restored to let people appreciate what we had that was so important to the consciousness that it termed the word "space shuttle" because that's where it came from.

Schneider: If you looked pre-restoration all you would do is cry. When you look at the post, you see what the original design and intent was. ['Star Trek's Galileo Restoration: Watch the Video]

SPACE.com: How do you go about restoring a set piece like this?

Schneider: There are no plans that we have ever found for this thing as built. We're doing all of this on the basis of Internet plans. There are dozens of pages of Internet plans, screen caps, very exacting measurements. The original Galileo was made by Gene Winfield … We're trying to get to that look [from the original show].

In fact, in the back is a little, what I would call, hood that Spock pulls down and he kind of looks and pokes at things. We have a fan who is replacing and putting in the components in the hood … People really want this to be — you can't go to perfect, there's no such thing as perfect — but they really want it to be as close as one can get [to perfect] because we hope that this is the last restoration.

SPACE.com: How many man hours have gone into the restoration?

Schneider: It's probably taken 2,000 man hours of work. It's a world-class restoration at a world-class shop. This is not me because I have no skills as an amateur doing work. This is a fabulous facility [Master Shipwrights in New Jersey].

SPACE.com: Where is the funding coming from? Was there a crowd funding effort?

Schneider: I didn't want to slow down the project to get crowd funding. So the crowd is us … We promised in the beginning that we would be donating to a place of public venue. It's a big out of pocket hunk … but let's get down to reality. We can't think of a more important "Star Trek" piece out in the wild.

SPACE.com: What does "Star Trek" mean to you personally?

Schneider: "Star Trek" is supposed to be our future in space. It is not fictional — it is of course — but it is not intended to be a galaxy far, far away. It is intended to be what we do on this planet with our capabilities over the next few hundred years, and, as such, it's inspiring ... It's the career I would have wanted to have. It's building the space ships. If I can't build the real ones, we may as well get together and build the mock ups.

Peters: Adam is more into the ship models. I'm more into the props and costumes, but for both of us, it's preserving this show that meant so much to us. I was born in 1960 so I was six when "Star Trek" premiered and I remember watching the first episode on TV. When "Star Trek.," in its third season, got moved to Friday nights at 10, that was past my bedtime and my mom would put me to bed at 8 at night, wake me up at 10, let me watch "Star Trek" and then put me back to bed. That kind of sealed my fate as a really hardcore "Star Trek" fan. We're both at a point now where we want to now preserve this show and preserve the assets of this show for posterity.

Schneider: Well, and for inspiration.

SPACE.com: Where are you hoping to place the ship once it's finished?

Editor's Note: The preceding interview was edited for length and clarity.