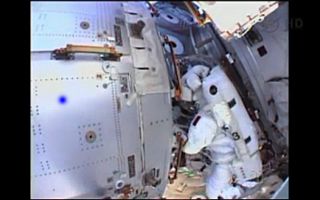 NASA astronaut Chris Cassidy and Italian astronaut Luca Parmitano planned to spend more than six hours spacewalking outside the International Space Station on July 16, 2013. But NASA cut the spacewalk short after just an hour due to a water build up inside Parmitano's spacesuit.
(Image: © NASA TV)

NASA aborted a planned six-hour spacewalk by two astronauts outside the International Space Station today (July 16) when one of the spacewalkers reported "a lot of water" inside his spacesuit helmet, a potentially scary situation.

European Space Agency astronaut Luca Parmitano reported that helmet started filling with water, making it difficult for him to continue the spacewalk outside of the International Space Station. The spacewalk ended after one hour and 32 minutes. It was supposed to last six hours and 15 minutes. The crew was in no immediate danger during the spacewalk, NASA officials said.

"There is some in my eyes, and some in my nose," Parmitano said. "It's a lot of water."[Photos: NASA Aborts Spacewalk After Spacesuit Water Leak ]

This is the second shortest spacewalk in history. The shortest — lasting only 14 minutes — happened in 2004 when astronaut Mike Fincke had a pressurization problem in his oxygen tank.

Parmitano reported the water in his spacesuit about one hour and nine minutes into the spacewalk. The cause of the water leak isn't yet known, but the tasks scheduled for the spacewalk can be deferred until a later excursion, NASA officials said.

"[Mission Controllers on the ground] are taking the cautious path and ending the EVA early," a NASA spokesman said during a broadcast on NASA TV.

NASA officials are expected to hold a news conference to discuss the aborted spacewalk later today.

Parmitano headed straight back to the U.S. Quest airlock on the International Space Station while Cassidy followed. Cassidy assured Parmitano repeatedly that he was close behind.

Once inside the airlock, the astronauts began repressurizing the chamber in order to return inside the station. At one point, Cassidy said it looked as if Parmitano could not hear any calls over his spacesuit radio.

"He looks fine," Cassidy said. "He looks miserable, but okay."

Today's spacewalk was the second in eight days for Parmitano and Cassidy. The two astronauts planned to continue work that will prepare the station for the arrival of a new Russian multipurpose laboratory module slated to arrive later this year, and perform other maintenance tasks.

This spacewalk is the 171st spacewalk in support of building the International Space Station, NASA officials said. This is the second spacewalk for Parmitano and the sixth for Cassidy. On July 9, Parmitano became the first Italian astronaut to walk in space.

Parmitano and Cassidy are joined on the space station by NASA's Karen Nyberg, Russian cosmonauts Fyodor Yurchikhin, Pavel Vinogradov and Alexander Misurkin. Together, they make up the orbiting laboratory's Expedition 36 crew .

The $100 billion International Space Station is the product of five space agencies representing 15 different countries. Rotating crews of astronauts have continually staffed the orbiting laboratory since 2000.