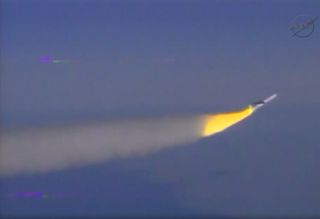 NASA's IRIS sun-observing telescope launches toward space on an Orbital Sciences Pegasus XL rocket just after its separation from an L-1011 carrier aircraft over the Pacific Ocean on June 27, 2013.
(Image: © NASA TV)

Nearly one hour later, at 10:27 p.m. EDT (7:27 p.m. local time), the plane dropped its payload 39,000 feet (11,900 meters) above the Pacific Ocean, about 100 miles (160 kilometers) northwest of Vandenberg. After a five-second freefall, the Pegasus rocket roared to life and carried the sun-watching IRIS into Earth orbit. [NASA's IRIS Solar Observatory Mission in Pictures]

Scientists hope IRIS' observations help them better understand how energy and material move around the sun. They want to know, for example, why the outer atmosphere of the sun is more than 1,000 times hotter than the star's surface.

IRIS is part of NASA's Small Explorer program, which caps the cost of a space mission at $120 million. Like its budget, the spacecraft is small, weighing just 400 pounds (181 kilograms) and measuring 7 by 12 feet (2.1 by 3.7 m) with its power-generating solar panels deployed.

After a 60-day checkout period on orbit, IRIS will begin its science campaign. The probe will stare at a mysterious sliver of the sun between the solar surface and its outer atmosphere, or corona.

"What causes this rise? How does the energy transfer from the surface, the cool surface, to this hot outer atmosphere?" Jeffrey Newmark, IRIS program scientist at NASA Heaquarters in Washington, D.C., said Tuesday (June 25) during a prelaunch mission briefing. "These are the questions that IRIS, the science of IRIS, is going to address."

A more focused look at the sun

While other NASA solar spacecraft — such as the Solar Dynamics Observatory (SDO) and the two STEREO (Solar TErrestrial RElations Observatory) probes — record views of the entire sun, IRIS' spectrograph will focus on just 1 percent of our star at a time, resolving features as little as 150 miles (240 km) across.

"Relating observations from IRIS to other solar observatories will open the door for crucial research into basic, unanswered questions about the corona," Joe Davila, IRIS project scientist at NASA's Goddard Space Flight Center in Greenbelt, Md., said in a statement.

IRIS was orginally slated to launch Wednesday (June 26), but a power outage across California's central coast knocked out key elements of Vandenberg's tracking and telemetry systems, causing a one-day delay.

Powerful sun storms can wreak havoc with electrical grids here on Earth. So the delay was appropriate in a way, highlighting the importance of IRIS' mission, said Pete Worden, director of NASA's Ames Research Center in Moffett Field, Calif., which is responsible for IRIS mission operations and ground data systems.