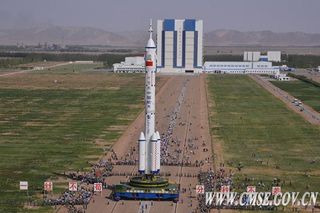 The Shenzhou 10 spaceship atop its Long March 2F rocket booster has been rolled out to launch pad.
(Image: © CMSE)

China's Shenzhou 10 piloted mission has entered the final preparation phase, closing in on a mid-June liftoff, according to that country's space officials.

The Shenzhou 10 spaceship, atop its Long March 2F rocket booster, has been vertically transferred from a preparation area to the launch pad at the Jiuquan Satellite Launch Center in the Gobi desert.

The 8.5-ton Tiangong 1, or Heavenly Palace 1, has been orbiting Earth since September 2011 and was used in China's first piloted rendezvous-and-docking venture — the three-person Shenzhou 9 space trek — in June 2012.

The target module's orbit for the Shenzhou 10 mission was adjusted in late May in preparation for the upcoming linkup.

Additional spaceship testing, rocket-function testing and the crew-spaceship-rocket-ground joint testing are being consecutively carried out now — all leading toward a final status check and confirmation of readiness to launch.

According to Chinese media reports, the Shenzhou 10 mission will be the last of three planned experiments to master the technologies of space rendezvous and docking to enable China to build and operate a large space station around 2020.

Chinese space officials have noted that Shenzhou 10 will be the first "operational" flight in the Chinese human spaceflight program, with four main objectives:

Zhou Jianping, chief engineer of China's manned space program, told news media in March that one of the three astronauts onboard Shenzhou 10 will include a woman.

While the names of the Shenzhou 10 crew remain unknown, and are typically not released until a few days before the mission, Wang Yaping is being spotlighted by Chinese media as the only female astronaut candidate being considered for the Shenzhou 10 spacecraft.

Born in 1980 in the eastern coastal city of Yantai, Shandong Province, Wang is a People's Liberation Army Air Force pilot.

In March 2010, China completed the process of selecting a new group of astronauts for its human spaceflight program: Seven Air-Force pilots, including five men and two women, were selected as the astronaut candidates. Wang was one of the two female candidates selected from 15 finalists.

Shenzhou 10 will be China's fifth manned space mission. The first Chinese astronaut, Yang Liwei, flew to orbit in 2003. Before this mission, eight Chinese astronauts — including one woman, Liu Yang — have gone into space.

"As China's human space program continues its steady progress towards the construction of a small space station — scheduled to be completed around the end of the decade — international interest in the program appears to be waning," said Gregory Kulacki, senior analyst and China project manager for the Global Security Program at the Union of Concerned Scientists. [How China's First Space Station Will Work (Infographic)]

Kulacki said that, of all the elements of the mission being talked about in the Chinese press prior to the Shenzhou 10 launch, the educational activities planned for the flight are gaining the most attention. The three-person crew plans to broadcast lessons on space science and exploration to Chinese students across the country.

"China's human spaceflight program now seems to be less threatening to U.S. observers who originally viewed the program with some suspicion,” Kulacki said. “More relaxed U.S. attitudes about the program, combined with the slow but steady pace of Chinese progress in human spaceflight, may create opportunities for U.S.-Chinese cooperation and collaboration in space.”

However, NASA is currently barred by Congress from collaborating directly with the Chinese space agency.

"Shenzhou 10 will be another step in China's slow but steady human spaceflight program," said Marcia Smith, editor of SpacePolicyOnline.com. "China's program may not have the pizazz of the early Soviet and U.S. space programs, which were much faster-paced, but [the program] appears to be sustainable as China deals with its own economic challenges."

Smith added that while there certainly are those in Congress who do not want to see the United States fall behind China — or any other country — in human spaceflight, she does not "sense that a successful Shenzhou 10 mission will alter decisions about NASA's future."

The debate over whether NASA should return humans to the moon, Smith said, "sometimes takes on a 'we need to get back there before China lands' tone. However, "the pro-lunar-return faction sees value in returning to the moon, regardless of China's plans," she added. "They may believe that playing the China card will help them in their quest, but it hasn't helped so far."