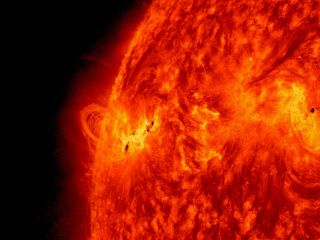 NASA's Solar Dynamics Observatory captured this image of the X1.2 class solar flare on May 14, 2013. The image shows light with a wavelength of 304 angstroms.
(Image: © NASA/SDO )

A huge explosion on the sun will deal Earth a glancing blow today (May 17) but should not pose a threat to the planet, scientists say.

The sun storm erupted late Tuesday (May 14) during a powerful solar flare — the fourth unleashed by a single sunspot in just 48 hours — and hurled a massive cloud of charged particles out into space at millions of miles an hour.

Such eruptions — known as coronal mass ejections, or CMEs — can wreak havoc if they hit Earth squarely, temporarily disrupting GPS navigation, satellite communications and power grids. But this one isn't aimed directly at us, so there's no cause for alarm, experts say. [Sun Unleashes Biggest Flares of 2013 (Photos)]

"High-latitude skywatchers should be alert for auroras tonight," Phillips added.

The solar flare associated with Tuesday night's CME registered as an X-class flare, the most powerful type. It was the fourth X flare unleashed by a sunspot known as AR1748 since Sunday night (May 12).

While incredibly powerful, Tuesday's flare actually was the weakest of the four rapid-fire X flares, clocking in at X1.2. The previous three registered as X1.7, X2.8 and X3.2 flares, respectively. Those three all occurred while AR1748 was facing away from Earth, however, so they did not affect our planet.

AR1748 is currently rotating toward Earth and should be lined up with us more or less directly by Saturday (May 18), researchers say. And the sunspot is still busy, firing off two medium-strength M flares over the past two days.

Scientists classifly strong solar flares into three categories, with C being the weakest, M intermediate and X the most powerful.

The sun is currently in an active period of its 11-year solar weather cycle and is expected to reach peak activity later this year. The current cycle, known as Solar Cycle 24, began in 2008.

Scientists have been tracking sunspots, solar flares and other space weather events since they were first discovered in 1843. Today, an international fleet of spacecraft keeps constant watch on the sun's activity.