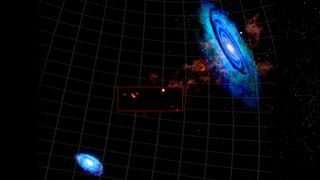 A never-before-seen interstellar network of gas between two nearby galaxies may provide the raw material needed to fuel star formation for billions of years, scientists say.

The discovery comes from a new survey of the dark, starless void between the Andromeda Galaxy (M31) and the Triangulum Galaxy (M33), which revealed that the giant clouds of hot ionized hydrogen gas that could provide a fresh influx for star birth.

A team of astronomers led by Spencer Wolfe of West Virginia University used the Green Bank Telescope in West Virginia to take a more in-depth look at the region between the two nearby galaxies. The study that led to the discovery initially began as a follow-up on previous observations of the same region taken more than decade ago. [See a video of the never-before clouds between galaxies]

"We wanted to not only confirm whether or not the feature was real, but also to get a better understanding of the structure," Wolfe told SPACE.com by email.

Their finding, that most of the ionized hydrogen gas resided in independent clouds, hints toward a source of star-formation fuel for the nearby galaxies.

Ionized hydrogen is a hydrogen atom stripped of its electron. It is extremely faint and difficult to measure, despite its abundance in the universe. Instead of directly targeting it, Wolfe and his team turned their telescope toward the neutral hydrogen — a hydrogen atom containing an electron — found within the clouds.

"Even ionized gas is not completely ionized," Robert Braun, of CSIRO Astronomy and Space Science in Australia, told SPACE.com by email. Braun was not involved in the research, but wrote a commentary piece that appeared with the study today (May 8) in the online journal Nature.

If only 1 percent of the gas was neutralized, then for every 100 hydrogen nuclei, only one could be spotted in its atomic state. By searching for that small percentage, Wolfe was able to map the entire cloud complex. Studying how light was absorbed in the optical and ultraviolet portion of the spectrum helped the team to estimate how much of the gas was ionized, and the mass of the gas itself.

Measuring the neutral hydrogen allowed the team to map the structure of the gas, revealing that more than half of it was gathered into clouds several thousand light-years across. Each of the seven clouds spotted in the relatively small region of space is the size of small collections of stars known as dwarf galaxies, though the clouds themselves lack stars.

After determining that the gas between the galaxies lay predominantly in condensing clouds, Wolfe and his team went on to model their motion. The clouds travel through space at speeds similar to the two nearby galaxies, indicating that they are independent bodies rather than castoffs from either galaxy.

The material seems to lie along a connected structure, a vast cosmic web connecting the galaxies.  Such filaments are held together by dark matter, the unknown material thought to make up roughly 80 percent of the universe.

"Our current hypothesis is that this gas is actually condensing from a diffuse filament of material that is believed to reside in the space between galaxies," Wolfe said.

The apparently desolate space between galaxies is far from empty. Hydrogen gas between collections of stars could come from several sources. As massive galaxies interact with one another, their tidal forces can pull gas out into the region between them. [When Galaxies Collide: Photos of Galactic Crashes]

Such an encounter seems to have occurred between the Andromeda Galaxy, the closest spiral galaxy to the Milky Way, and the Triangulum Galaxy. Lying 2.6 million and 3 million light-years from Earth, respectively, the two galaxies are part of the Local Group, composed of the Milky Way and 30 other galaxies. Models suggest that the two galaxies passed near one another but did not touch, but that some gas may have been stripped away from one or both galaxies.

Such interactions would have created stretched-out wisps of gas, rather than the clouds seen by Wolfe and his team.

The hydrogen gas may also be left over from the early universe, slowly consumed by galaxies over time. Although both mechanisms are likely to be active, Braun pointed out that current simulations suggest that the primordial component dominates.

Galaxies require gas to fuel star formation, but they burn through their initial supply within a few billion years. Collisions between galaxies, such as the one that will occur between Andromeda and the Milky Way in a few billion years, can provide a fresh influx, but often only rearranges existing material. Yet the Andromeda Galaxy is approximately 9 billion years old, indicating that it, like most galaxies, requires a fresh influx of material to keep building stars.

Wolfe and his team suggest that these clouds of gas could provide a future source of star formation for the Andromeda and Triangulum galaxies. If such clouds are widespread, they could provide a source for other galaxies, though how big a part they have is still uncertain.

"This is the first time we've been able to reach this level of faintness reliably, so it's hard to say just how prevalent the clouds really are," Wolfe said.

"Future observations of other areas around M31 and M33 will help us get a better handle on how much of this gas exists and what role it plays."