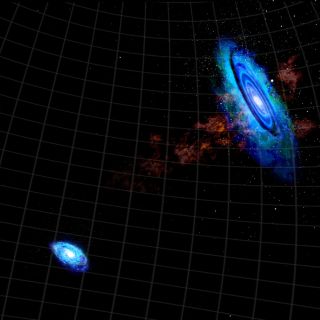 This artist's impression shows a gas "bridge" between the Andromeda Galaxy, or M31, on the right, and the Triangulum Galaxy, or M33, on the left.
(Image: © Bill Saxton, NRAO/AUI/NSF)

ANCHORAGE, Alaska — Two galaxies near our own Milky Way may have had a close encounter billions of years ago that created a vast bridge of gas that links them together to this day, a new study finds.

Observations from the National Science Foundation's Green Bank Telescope, a massive radio instrument in Green Bank, W.Va., indicate that hydrogen gas may be streaming between the colossal Andromeda Galaxy, or M31, and its neighboring Triangulum Galaxy, or M33.

"The properties of this gas indicate that these two galaxies may have passed close together in the distant past," Jay Lockman, of the National Radio Astronomy Observatory (NRAO), said in a statement. "Studying what may be a gaseous link between the two can give us a new key to understanding the evolution of both galaxies."

These results were hinted at in a 2004 discovery, made by astronomers using the Westerbork Synthesis Radio Telescope in the Netherlands, but these early observations of a gaseous link between M31 and M33 were largely contested on technical grounds, the researchers said.

The new results, however, seem to indicate that astronomers' hunch eight years ago may have been correct. The highly sensitive Green Bank Telescope has not only confirmed the existence of the gaseous bridge, but has also found six dense clumps of gas within it. [When Galaxies Collide: Photos of Galactic Crashes]

Lockman and his colleagues examined these clumps and found that they share roughly the same relative velocity with respect to Earth as they do to the Andromeda and Triangulum galaxies. This indicates that they could be part of a bridge between the two neighboring structures, the researchers said.

The Andromeda and Triangulum galaxies are located approximately 2.6 and 3 million light-years from Earth, respectively. Both are members of the so-called Local Group of galaxies, which is made up of our own Milky Way and roughly 30 other galaxies.

When two galaxies pass close to one another, the encounter can cause gas from the galaxies being strewn across intergalactic space, creating a lengthy "tidal tail" between them.

"We think it's very likely that the hydrogen gas we see between M31 and M33 is the remnant of a tidal tail that originated during a close encounter, probably billions of years ago," Spencer Wolfe, of West Virginia University in Morgantown, said in a statement. "The encounter had to be long ago, because neither galaxy shows evidence of disruption today."

The researchers intend to use the Green Bank Telescope (GBT) for follow-up studies to learn more about the gas bridge, and to better understand properties of the Andromeda and Triangulum galaxies themselves.

"The gas we studied is very tenuous and its radio emission is extremely faint — so faint that it is beyond the reach of most radio telescopes," Lockman said. "We plan to use the advanced capabilities of the GBT to continue this work and learn more about both the gas and, hopefully, the orbital histories of the two galaxies."

The scientists presented their findings here at the 220th meeting of the American Astronomical Society, which is being held from June 10 to 14 at the Dena'ina Civic and Convention Center.