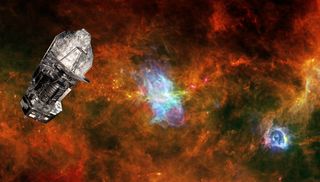 After nearly four years mapping the "hidden universe," the largest infrared telescope ever launched into space has reached the end of its life, European Space Agency officials say.

The $1.4 billion Herschel Space Observatory has exhausted the vital supply of liquid helium coolant that allowed it make the most sensitive and detailed observations of the cosmos in infrared light, ESA officials announced Monday (April 29).

The infrared space telescope's official end was recorded by a ground station in Australia, which recorded an increase in temperature for all of the spacecraft's instruments during the telescope's daily communications session. It began its mission in May 2009. [Amazing Photos from the Herschel Space Telescope]

"Herschel has offered us a new view of the hitherto hidden universe, pointing us to a previously unseen process of star birth and galaxy formation, and allowing us to trace water through the universe from molecular clouds to newborn stars and their planet-forming discs and belts of comets," ESA's Herschel project scientist Göran Pilbratt said in a statement.

Named for famed 18th century astronomer William Herschel, the space telescope was the most powerful infrared observatory ever launched to space until it stopped functioning this week. It has a main mirror 11.5 feet (3.5 meters) across nearly 1.5 times larger than Hubble Space Telescope, and was designed to chart the universe in the far-infrared to sub-millimeter wavelengths of light.

"Herschel gave us the opportunity to peer into the dark and cold regions of the universe that are invisible to other telescopes," said John Grunsfeld, NASA's associate administrator for science missions. The U.S. space agency was a partner with ESA in the Herschel mission.

The Herschel space observatory is responsible for some amazing images of far-off cosmic wonders, such as its dazzling views of the Eagle Nebula and Andromeda Galaxy. Its helium-cooled instruments allowed astronomers to study far away starburst galaxies and star formation closer to home in the Milky Way. The coolant kept Herschel's instruments chilled to a temperature of minus 455 degrees Fahrenheit (minus 271 degrees Celsius), but that supply was expected to evaporate over time.

"It feels like losing a member of the family," Herschel mission officials wrote in Twitter post at the mission's end. "Almost 4 incredibly intense years in space."

The Herschel observatory collected more than 35,000 scientific observations and 25,000 hours of data. According to ESA officials, that plethora of data will be Herschel's main contribution to the world of science.

"The archive will become the legacy of the mission," ESA officials explained in a statement. "It is expected to provide even more discoveries than have been made during the lifetime of the Herschel mission."

NASA scientists said the Herschel mission's effect on astronomy will far outlast the four-year mission itself.

"Herschel has improved our understanding of how new stars and planets form, but has also raised many new questions," said Paul Goldsmith, NASA Herschel project scientist at JPL, said in a statement. "Astronomers will be following up on Herschel's discoveries with ground-based and future space-based observatories for years to come."

The space telescope has also paved the way for future missions focused on observing the universe in infrared wavelengths, ESA officials added.

"The mission resulted in a number of technological advancements applicable to future space missions and potential spin-off technologies," ESA officials said. "The mission saw the development of advanced cryogenic systems, the construction of the largest telescope mirror ever flown in space, and the utilization of the most sensitive direct detectors for light in the far-infrared to millimeter range."