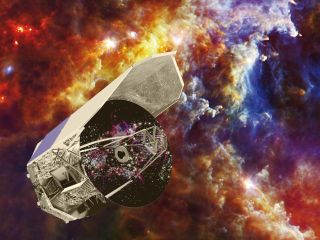 The Herschel infrared observatory has an unprecedented view on the cold universe, bridging the gap between what can be observed from the ground and earlier infrared space missions, and bringing to light previously unseen star-forming regions and galaxies enshrouded in dust
(Image: © ESA - C. Carreau)

The largest infrared telescope ever launched into space is almost at the end of its cosmic life, European Space Agency officials say.

After nearly four years mapping the cosmos, ESA's prolific Herschel Space Observatory is expected to exhaust its vital supply of liquid helium coolant in the coming weeks. Once that runs out, the Herschel observatory will no longer be able to continue its scans of the cold, early universe, ESA officials said.

Named for astronomer William Herschel, the space telescope launched in May 2009 and is the most powerful, infrared telescope ever sent into space. The Herschel observatory has a main mirror about 11.5 feet (3.5 meeters) across — nearly 1.5 times larger than Hubble Space Telescope — and was built to map the universe in the far-infrared to sub-millimeter wavelengths of light.

The results yielded amazing images of the iconic Eagle nebula and other comic targets, with the telescope also allowing astronomers to study some of the coldest objects in space such as distant starburst galaxies, as well as new planetary systems forming around stars closer to our solar system. [See  the Herschel observatory's amazing images]

But the instruments that carry out these sensitive observations must be cooled to an icy minus 455 degrees Fahrenheit (minus 271 degrees Celsius), close to absolute zero. To do that, the instruments are positioned on top of a tank filled with superfluid liquid helium.

This coolant, however, evaporates over time. While it is not possible to predict the exact day it will run out, ESA engineers suspect the Herschel observatory's coolant has nearly run dry.

"It is no surprise that this will happen, and when it does we will see the temperatures of all the instruments rise by several degrees within just a few hours," said Micha Schmidt, the mission operations manager for Herschel observatory at ESA's European Space Operations Centre in Darmstadt, Germany.

ESA officials said they were pleased with the research to come out the mission, which has cost a total of $1.4 billion (1.1 billion euros).

"When observing comes to an end, we expect to have performed over 22,000 hours of science observations, 10 percent more than we had originally planned, so the mission has already exceeded expectations," Leo Metcalfe, the science operations and mission manager for Herschel at ESA's European Space Astronomy Centre in Madrid, said in a statement.

"In fact, the peak of scientific productivity is still ahead of us, and the task now is to make the treasure trove of Herschel data as valuable as possible for now and for the future," Pilbratt said.

The Herschel Space Observatory mission was not confined to the European Space Agency. It included participate from a consortium of European science institutes, as well as the NASA. The U.S. space agency set up a Herschel project office at its Jet Propulsion Laboratory in Pasadena, Calif., to oversee its role in the space telescope mission.

"We have known from the beginning of the mission that Herschel's lifetime would be limited by the supply of liquid helium." said Paul Goldsmith, the NASA Herschel Project Scientist at JPL. "So the whole team worked very hard to make the best use of every minute of observing time."