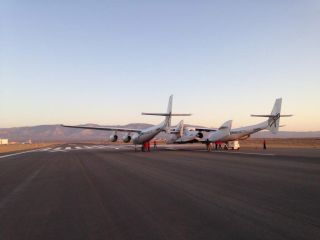 WhiteKnightTwo carries SpaceShipOne on the runway before a test flight, April 29, 2013, in Mohave, CA.
(Image: © Virgin Galactic (via Twitter as @virgingalactic))

Video: SpaceShipTwo Rises On A Tail Of Fire

Wannabe space tourists rejoice! The private suborbital spacecraft SpaceShipTwo from Virgin Galactic has lit its rocket engines for the first time in flight. This marks the long-awaited first "powered test flight" for the vehicle, which is designed to carry paying passengers on quick jaunts to the edge of space and back for $200,000 a ride.

"For the 1st time ever, SS2 has lit her rocket engine in flight! A major milestone in human spaceflight. Photos, video, and details to follow," Virgin Galactic officials wrote on Twitter today. SpaceShipTwo was carried aloft from a runway at California's Mojave Air and Spaceport this morning (April 29) by the carrier mothership WhiteKnightTwo. The mothership released SpaceShipTwo in midair at an altitude of about 47,000 feet (14,300 meters), and the smaller vehicle then test fired its rocket engine, designed to propel the craft of the rest of the way up to space.

Virgin Galactic is backed by British billionaire Sir Richard Branson, who wrote about his excitement this morning on Twitter: "Occasionally you have days that are ridiculously exciting. Today is such a day."