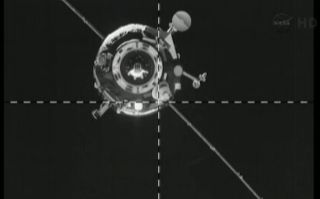 An unmanned cargo-carrying spacecraft successfully docked with the International Space Station Friday morning (April 26), despite a glitch in the capsule's navigation system.

After its launch from the Baikonur Cosmodrome in Kazakhstan on Wednesday, the Russian Progress 51 spacecraft failed to deploy one of the two antennas used for the Kurs automated docking system. Russian ground controllers were able to reposition the antenna, allowing the automated docking to go ahead as planned.

Russian cosmonauts Pavel Vinogradov and Roman Romanenko kept an eye on Progress as it moved into position.

"We have contact," one of the cosmonauts said after docking, "We have capture."

Although the cosmonauts were prepared to take over docking procedures, the automated system worked and the spacecraft fully docked to the station at 8:34 a.m. EDT (1234 GMT) while flying 251 miles (404 kilometers) over the border between China and Kazakhstan.

The approach to the space station was slower than usual because controllers on the ground and astronauts on the International Space Station were carefully monitoring Progress's position, NASA officials said.

At first the Progress was "soft-docked" and not secured in place with hooks in latches, giving the station crew and flight controllers a chance to make sure its stuck antenna posed no risk to the station's exterior. When they saw it was safe, the Progress was slowly drawn into the port and secured.

Vinogradov and Romanenko are flight engineers on the station's Expedition 25 crew, along with NASA astronauts Tom Marshburn and Chris Cassidy, and Russian cosmonaut Alexander Misurkin. The crew is led by commander Chris Hadfield of the Canadian Space Agency.

Romanenko, Marshburn and Hadfield are expected to leave the space station in May after six months onboard. Once they leave, Vinogradov will take over for Hadfield as the commander of the Expedition 36 mission.