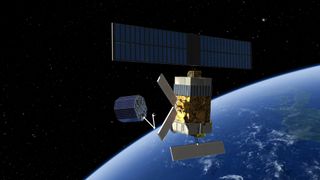 Artist’s concept showing how a defunct satellite could be grappled for a controlled re-entry into Earth’s atmosphere, where it would burn up and be destroyed harmlessly.
(Image: © ESA/Mixed-Reality Communication GmbH)

Hundreds of scientists, engineers and space-law experts are gathering this week to discuss the growing problem of space debris, and will propose ways to curb the accumulation of new junk in orbit.

The 6th European Conference on Space Debris is being held April 22-25 at the European Space Operations Center in Darmstadt, Germany. More than 300 representatives, ranging from researchers to policymakers, are expected to attend the four-day event, according to officials at the European Space Agency (ESA).

Conference attendees will discuss the buildup of potentially harmful debris in orbit, and address possible ways to remove defunct satellites and other pieces of errant space hardware.

More than 170 million pieces of space junk are currently orbiting Earth, including 29,000 objects that are larger than 4 inches (10 centimeters), according to ESA estimates. As they speed through space at 17,000 mph (27,000 km/h), these objects pose collision risks to both other satellites in orbit and the International Space Station.

"Any of these objects can harm an operational spacecraft," Heiner Klinkrad, head of ESA's Space Debris Office, said in a statement.

Roughly two-thirds of the known pieces of debris were created by explosions in orbit or collisions, ESA officials said.

In 2009, a U.S. Iridium communications satellite was struck by a defunct Russian Cosmos military satellite in what became a wake-up call for the industry. The crash destroyed the two spacecraft and left a huge cloud of debris.

Then, in 2007, China intentionally destroyed one of its aging weather satellites in a controversial anti-satellite test that littered Earth’s orbit with more than 2,500 scraps of space junk.

Since then, researchers and satellite operators have tried to tackle the issue of sustainability in space.

"Space-debris mitigation measures, if properly implemented by satellite designers and mission operators, can curtail the growth rate of the debris population," Klinkrad said. "Active debris removal, however, has been shown to be necessary to reverse the debris increase."

But finding any solution to the space-debris problem will require a collaborative approach.

"As this is a global task, active removal is a challenge that should be undertaken by joint efforts in cooperation with the world's space agencies and industry," Thomas Reiter, ESA's director of human spaceflight and operations, said in a statement.