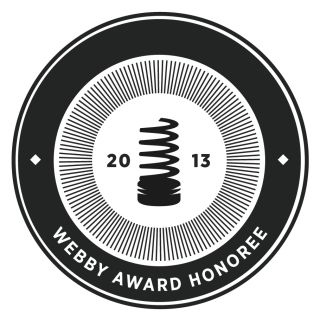 SPACE.com has been named an Official Honoree in the 2013 Webby Awards.

SPACE.com, the premier destination for innovation, technology, entertainment, astronomy and space news, announced yesterday (April 17) that it has been selected as an Official Honoree in the Science category of the 17th Annual Webby Awards.

SPACE.com was one of only 11 entries afforded Official Honoree status in the Science category, sharing the honor with websites from some of the most influential technology and science organizations in the world, including NASA (Eyes on Earth by NASA) and MIT (MIT Technology Review).

SPACE.com is announcing the distinction in conjunction with its coverage of the Antares rocket's maiden launch, which may occur at 5 p.m. EDT (2100 GMT) Friday (April 19) from Virginia's Mid-Atlantic Regional Spaceport.

The launch was originally slated for Wednesday (April 17), but a data cable popped loose from the booster just minutes before liftoff. The mission team aborted the launch and began working to prep the rocket for another try.

The launch of Antares, a two-stage booster built by Orbital Sciences Corp., is designed to pave the way for unmanned cargo missions to the International Space Station later this year. To watch the Antares launch webcast live, courtesy of NASA, visit SPACE.com: http://bit.ly/QTqM6t.

"The Webby Awards honor work that sets the standards for the online community, so we're thrilled to receive this distinction," SPACE.com managing editor Tariq Malik said in a statement. "To be recognized alongside NASA and MIT — leaders in the technology, space and science arena — underscores the unique expertise of our editorial team, as well as the quality of the news coverage we deliver to our community of readers."

Managed by the International Academy of Digital Arts and Sciences (IADAS), The Webby Awards are the most prestigious international award honoring excellence on the Internet. This year, 11,000 entries were received from all 50 states in the U.S. and more than 60 countries. The Official Honoree distinction is awarded to only the top 15 percent of all work entered that exhibits excellence in the following six criteria:

Launched in 1999, SPACE.com is the world's No. 1 source for news of astronomy, skywatching, space exploration, commercial spaceflight and related technologies. Its team of experienced reporters, editors and video producers explore the latest discoveries, missions, trends and futuristic ideas, interviewing expert sources and offering up deep and broad analysis of the findings and issues that are fundamental to our understanding of the universe and our place in it. SPACE.com articles are regularly featured on some of the world's top news sites, including Yahoo, CBS, AOL, Fox, NBC and others.

SPACE.com is a TechMediaNetwork property. TechMediaNetwork's owned and operated websites and extensive publisher partner network combine to reach more than 49 million visitors a month, delivering the most cutting-edge technology and science content available.

TechMediaNetwork is a publisher of high-quality original content with owned and operated web sites and a publisher partner network that, combined, reaches more than 49 million visitors per month worldwide and is currently the third largest technology news property.

TechMediaNetwork also reaches a vast audience through distribution of its content to major media partners, including Yahoo, CBS News, AOL, Fox News, and MSNBC. Its original content connects consumers to the news, information and reviews they need to know about technology and science — from the amazing technology required to land the Curiosity rover on Mars to the most up-to-date expert reviews of the iPhone 5 and Windows 8. TechMediaNetwork staff has reviewed more than 800 categories of products and services at TopTenREVIEWS, and their writers and editors develop news, features and commentary on LAPTOP, TechNewsDaily, BusinessNewsDaily, SPACE.com, LiveScience, and Newsarama.

In 2011, TechMediaNetwork received a $33 million Series B financing from ABS Capital Partners, a leading growth equity investor. Existing investors Village Ventures and Highway 12 Ventures also participated in the round.