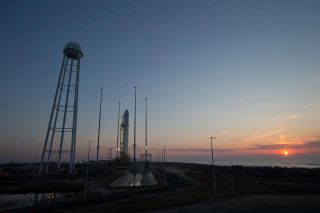 It's almost show time for a new private rocket on Virginia's Eastern Shore.

A commercially built rocket designed to launch unmanned cargo ships to the International Space Station is counting down toward its first-ever flight test this week from Wallops Island, Va., a small island that is home to NASA's Wallops Flight Facility and a young commercial spaceport. Liftoff for the rocket, called Antares, is currently set for Wednesday, April 17, at 5 p.m. EDT (2100 GMT).

"The team is beyond excited," Barron Berneski, spokesman for the Dulles-based Orbital Sciences Corp. that built the Antares rocket, told SPACE.com in an email. [See photos of the Antares rocket test flight preparations]

Berneski said Orbital Sciences engineers are currently working to replace a valve on the Antares rocket that thwarted an engine test firing on Saturday (April 13).

"Late in the countdown, at about T-16 minutes, the test was halted because the launch team had detected a technical anomaly in the process," Berneski said of the valve glitch in a statement. "A replacement unit will be installed within 24 hours with the goal of maintaining the April 17 launch date."

The upcoming Antares launch is the highest profile launch yet from the Wallops Flight Facility, which was founded in 1945 and currently serves as NASA's home for balloon science missions and small sounding rocket launches that don't reach all the way into orbit. It is located on the southern tip of Wallops Island, which it shares with the Mid-Atlantic Regional Spaceport, a staging ground for commercial rocket launches overseen by the Virginia Commercial Space Flight Authority.

Orbital Sciences plans to launch at least eight Antares rockets from the Mid-Atlantic Regional Spaceport, nicknamed MARS, to deliver tons of cargo to the International Space Station under a $1.9 billion deal with NASA set in 2008. The company is one of two private spaceflight firms with a commercial cargo delivery deal. The California-based SpaceX, which has flown three missions to the station since 2012, is the other and has a $1.6 billion contract to provide 12 NASA cargo flights.

But unlike SpaceX, which launches its Falcon 9 rockets and Dragon space capsules toward the station from Cape Canaveral in Florida — a mainstay launching ground for American manned and unmanned spaceflight — Orbital Sciences picked the MARS site for Antares flights.

"MARS has completed construction and testing operations on its launch complex at Wallops Island, the first all-new large-scale liquid-fuel launch site to be built in the U.S. in decades," Orbital Sciences CEO David Thompson said in October 2012 when the company took control of its launch pad at the site.

Wednesday's Antares rocket launch will not carry a full-fledged Cygnus spacecraft when it blasts off. Since the mission is a test flight, it will carry a "mass simulator" designed to mimic the weight of a real cargo ship.

Orbital Sciences has dubbed the mission Antares A-ONE and expect the rocket to reach a maximum altitude of between 155 miles and 185 miles (250 and 300 kilometers) above Earth. The mission may also carry a set of tiny satellites for NASA, according to previous mission descriptions.

The Antares rocket is a two-stage booster designed to launch robotic cargo ships called Cygnus on one-way trips. The Cygnus spacecraft is a one-use vehicle and is designed to burn up in Earth's atmosphere at the end of its mission instead of returning cargo to Earth like SpaceX's Dragon capsules.

If all goes well, Orbital Sciences hopes to launch the first official Antares rocket and Cygnus flight toward the space station later this year.

"There's still a lot of work to do ahead of the launch, but after nearly five years from concept design to actual launch, it feels great to be at the finish line of the R&D effort and at the starting line for our next big new product line, serving not just NASA cargo delivery, but other launch markets as well,' Berneski said.