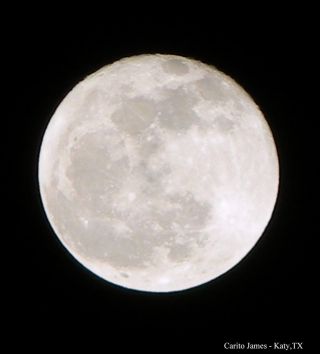 NASA chief Charles Bolden says the space agency won't be sending astronauts to land on the moon any time soon, according to press reports.

The U.S. space agency won't lead the way back to the moon in the foreseeable future in order to maintain its focus on manned missions to an asteroid, and eventually Mars, Bolden said during a joint meeting of the Space Studies Board and the Aeronautics and Space Engineering Board last Thursday (April 4), according to a SpacePolitics.com report by Jeff Foust.

"NASA will not take the lead on a human lunar mission," Foust quoted Bolden as saying. "NASA is not going to the moon with a human as a primary project probably in my lifetime. And the reason is, we can only do so many things."

Instead, he said the focus would remain on human missions to asteroids and to Mars. "We intend to do that, and we think it can be done," Bolden said. [Most Amazing Moon Missions in History]

Bolden's comments on new manned moon missions came in response to a suggestion that the scientific community, as a whole, is not enthusiastic about pushing ahead with a manned mission to an asteroid by 2025 — an idea endorsed by President Barack Obama in 2010.

In April 2010, Obama called on NASA to pursue the manned asteroid mission as a precursor to sending astronauts to Mars in the mid-2030s. That new space vision, unveiled just after Obama canceled NASA's moon-oriented Constellation program, which sought to send astronauts on new lunar landing missions, in favor of the asteroid and Mars plan.

During the April 4 meeting, Bolden apparently made it clear that NASA does not plan to lead the charge back to the moon's surface.

"I don’t know how to say it any more plainly," Bolden said, according to Foust. "NASA does not have a human lunar mission in its portfolio and we are not planning for one."

With Obama now in his second term, Bolden also warned that if the next presidential administration chooses to make another major course change in NASA's human spaceflight program, such a change would mean "we are probably, in our lifetime, in the lifetime of everybody sitting in this room, we are probably never again going to see Americans on the moon, on Mars, near an asteroid, or anywhere. We cannot continue to change the course of human exploration."

NASA made history on July 20, 1969 when Apollo 11 astronauts Neil Armstrong and Buzz Aldrin became the first humans ever to walk to on the moon. Five more successful moon landings would follow until 1972, when the series ended with NASA's Apollo 17 mission.

Since then, NASA has launched many unmanned missions to the moon, including the prolific Lunar Reconnaissance Orbiter, which has actually photographed the Apollo moon landing sites and is still active today. In the last decade, Japan has explored the moon with its Kaguya orbiter, while India explored the lunar surface from orbit with its Chandrayaan 1 spacecraft. China has launched two orbiter missions to the moon, Chang'e 1 and Chang'e 2, and is preparing to launch a third flight — the Chang'e 3 mission — later this year that is expected to include an orbiter, lander and rover.