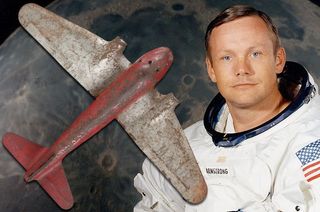 Long before Neil Armstrong flew to the moon, he played with this red metal toy plane, which is now up for auction by Heritage Auctions of Dallas.
(Image: © Heritage/NASA)

A toy plane that Neil Armstrong is said to have played with as a child — years before he became a naval aviator, research pilot and the first astronaut to walk on the moon — will be auctioned off this month in Dallas.

The red, metal toy, which Heritage Auctions expects to sell for as much as $2,500 at its April 18 space-themed auction, was discovered by the family who bought Armstrong's boyhood home in 1964. The model airplane was discovered in the house's attic, along with a red wagon and some homework papers that also belonged to the future Apollo 11 moonwalker.

"In July 1964 my parents purchased the home on 601 W. Benton Street, Wapakoneta, Ohio from Steve and Viola Armstrong," Jacqueline (Miller) Knapke wrote, describing Armstrong's parents in her letter of authenticity. "Mrs. V. Armstrong verified at that time that the wagon and this airplane was Neil's and that he and his brother played with it."

The Millers donated the red toy wagon to the Armstrong Air and Space Museum in Wapakoneta, but held on to the toy plane until now. [Neil Armstrong: An Icon Remembered (Photos)]

Neil Armstrong died on Aug. 25, at age 82 following complications from heart surgery. During his lifetime, he refrained from selling his memorabilia and, in response to what he attributed to the commercialization of the hobby, stopped signing autographs in the 1990s.

Heritage is also offering for sale the homework papers and a handmade booklet that were also left behind in the attic. Each of the documents' lots is expected to sell for $1,500 to $2,500.

Like Armstrong's boyhood effects, which were saved and consigned for auction by a third party, the majority of the lots being offered by Heritage represent the holdings of a collector, rather than the astronauts themselves.

Three hundred out of the more than 550 lots for sale were consigned by the Steven R. Belasco estate.

"The collection is a tribute to the incredible prowess of its collector," Michael Riley, Heritage senior historian and its chief cataloger for space exploration, said in a statement. "He was as well known and dedicated a collector as any of us ever encountered."

Belasco died in 2012 due to an acute respiratory infection. In 2004, he bid $16,000 on a toothbrush that flew to the moon, which drew media attention — not only because of the price he paid, but because he was a vice president at Colgate-Palmolive, a company known for its oral hygiene products,

That same dental instrument, a light blue Lactona "Tooth Tip" brush that astronaut Buzz Aldrin used throughout the Apollo 11 mission that he flew with Armstrong in 1969, is now estimated to sell for upwards of $24,000.

Another Aldrin space artifact highlighted by Heritage is a flown flashlight from the Gemini 12 mission, estimated to sell for $10,000 to $15,000. The Velcro-wrapped torch was originally purchased by Belasco in 1999 for $9,200.

The other items from Belasco's 13 years collecting space memorabilia span Mercury, Gemini and Apollo missions, including a significant grouping of artifacts that flew to the moon's surface.

In addition to the Armstrong and Belasco lots, Heritage is also selling more than two dozen items from Lola Morrow, the 1960's "den mother to the astronauts" who served as the crew members' secretary in Cape Canaveral, Fla.

The Morrow lots include astronaut-autographed books and photos, as well as letters and mission patch charms.

The highlight item may be the humorous drawing that was gifted to her upon her retirement from NASA in 1969. The caricature, which shows Morrow at her desk with six arms typing, writing, paging, talking on the phone, waving, and handling reports — all at once, is signed by 26 astronauts including Armstrong, Aldrin, and eight other moonwalkers. It is estimated to sell for $6,000 to $10,000.