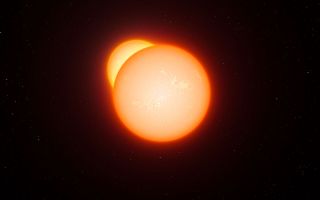 This illustration shows an eclipsing binary star system. As the two stars orbit each other they pass in front of one another and their combined brightness, seen from a distance, decreases. By studying how the light changes, and other properties of the system, astronomers can measure the distances to eclipsing binaries very accurately.
(Image: © ESO/L. Calçada)

The distance to one of the Milky Way's next-door neighbors, a satellite galaxy that orbits its outskirts, has been determined more accurately than ever before, astronomers announced today (March 6).

The achievement could help scientists calibrate other cosmic distances, which are essential for understanding how quickly the universe is expanding and solving the mystery of dark energy. Dark energy is the name given to whatever is tugging the universe apart and causing its expansion to accelerate.

According to the new measurement, the nearby dwarf galaxy called the Large Magellanic Cloud lies 163,000 light-years away.

"I am very excited because astronomers have been trying for a hundred years to accurately measure the distance to the Large Magellanic Cloud, and it has proved to be extremely difficult," Wolfgang Gieren, an astronomer at Chile's Universidad de Concepción, Chile, said in a statement. "Now we have solved this problem by demonstrably having a result accurate to 2 percent."

The finding was nearly a decade in the making, and required repeated precise measurements of rare pairs of binary stars that are oriented so that they eclipse each other as they orbit, from the perspective of Earth. [How Scientists Measured the Large Magellanic Cloud Distance (Video)]

Using telescopes at the European Southern Observatory's La Silla Observatory and the Las Campanas Observatory, both in Chile, Gieren and his colleagues identified eight pairs of eclipsing binaries in the Large Magellanic Cloud.

By tracking the changes in the star pairs' brightness when one star passed in front of the other, and vice versa, as well as measuring the stars' orbital speeds, the scientists could deduce the stars' sizes and masses, as well as details regarding their orbits. With this information, combined with measurements of the stars' total brightness and colors, their precise distances could be determined.

These measurements improve on previous estimates of the Large Magellanic Cloud's distance, which were all based on methods that had inherent uncertainties.

"Because the LMC is close and contains a significant number of different stellar distance indicators, hundreds of distance measurements using it have been recorded over the years," said team member Ian Thompson of the Carnegie Institution for Science in Washington, D.C. "Unfortunately, nearly all the determinations have systemic errors, with each method carrying its own uncertainties."

Pinning down the distance of the LMC, in turn, allows scientists to refine their estimates of other, farther cosmic distances. That's because the measurements of close distances are used to calibrate measurements of far-off objects. The new findings should help astronomers narrow down the Hubble Constant, which denotes the rate of the universe's expansion, and is integral for the study of dark energy.

"We are working to improve our method still further and hope to have a 1 percent LMC distance in a very few years from now," said researcher Dariusz Graczyk . "This has far-reaching consequences not only for cosmology, but for many fields of astrophysics."

The findings are detailed in the March 8 issue of the journal Nature.