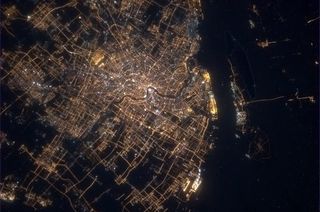 The dazzling lights of Shanghai, China, shine in this amazing view from the International Space Station by Canadian astronaut Chris Hadfield, who shared the image on Feb. 9, 2013, to mark Chinese New Year on Feb. 10.
(Image: © Canadian Space Agency/Chris Hadfield (Cmdr_Hadfield))

An astronaut on the International Space Station beamed festive messages to Earth Saturday (Feb. 9) to mark Chinese New Year celebrations across the planet.

"Happy Chinese New Year! May it be filled with joy and success," Hadfield wrote. "To celebrate, we sent a Progress spaceship to burn like fireworks in the sky."

That unmanned Russian Progress 48 spacecraft undocked from the space station early Saturday to clear a parking spot for a new robotic cargo ship, Progress 50, due to arrive at the station on Monday (Feb. 11).

Hadfield then posted a series of dazzling photos of China from space, including a view of daybreak over Taiwan, a striking image of Shanghai at night, amazing windswept clouds and a view of the city of Hangzhou.

"Hangzhou, China. As one of the few space-faring nations, I salute China, her astronauts, and their accomplishments," Hadfield wrote.

In 2003, China became the third country (after Russia and the United States) to achieve human spaceflight with the successful launch of its first astronaut, Yang Liwei, aboard the country's Shenzhou spacecraft. The country subsequently took bolder steps into space, with two-person and three-person spaceflights, a spacewalk and the launch of the Tiangong 1 space laboratory module.

In 2012, China launched its first crew to the Tiangong 1 space module, a three-person team that included the country's first female astronaut, Liu Yang.

In 2013, China is expected to launch another crewed mission to the Tiangong 1 space lab (the Shenzhou 10 mission), as well as the Chang'e 3 moon mission, which is expected to send a lander to the lunar surface.

Hadfield is one of six astronauts currently living aboard the International Space Station. In addition to the Canadian, the station's Expedition 34 crew includes three Russian cosmonauts and two American astronauts.