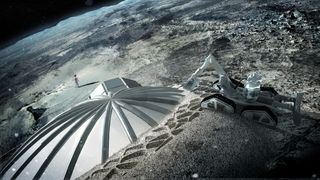 In this artist's rendering, a 3D printing robot pours layer after layer of hardened lunar dirt and dust onto an inflatable dome shell, 3D printing a lunar base.
(Image: © ESA/Foster + Partners)

The technology behind 3D printing has allowed users to craft musical instruments and prosthetic limbs, and now European scientists are taking a serious look at printing their own moon base.

The European Space Agency (ESA) study is investigating how practical constructing a manned base on the moon only using 3D printing technology could be, given that it would rely primarily on lunar dirt for building materials.

"Terrestrial 3D printing technology has produced entire structures," Laurent Pambaguian, who heads the project for ESA, said in a statement. "Our industrial team investigated if it could similarly be employed to build a lunar habitat."

A moon base with style

Pambaguian's team partnered with the London-based architecture firm Foster + Partners to draw up ideas for a 3D-printed moon colony. [See photos of the 3D-printed moon base ]

"As a practice, we are used to designing for extreme climates on Earth and exploiting the environmental benefits of using local, sustainable materials," Xavier De Kestelier of Foster + Partners said in a statement. "Our lunar habitation follows a similar logic."

Foster + Partners' 3D printed design is a simple four-person moon base that can be made completely out of repurposed moon dirt, which scientists call "regolith."

Because the entire design is made primarily from indigenous lunar materials moon, there is no need to transport costly materials from the Earth into space. The base would be built using a robotic printer roving over an inflatable dome.

"3D printing offers a potential means of facilitating lunar settlement with reduced logistics from Earth," Scott Hovland of ESA’s human spaceflight team said. "The new possibilities this work opens up can then be considered by international space agencies as part of the current development of a common exploration strategy."

The base would have a cell-like but strong frame resembling the structure of bird bones that will protect lunar residents from gamma radiation and micrometeorites that could destroy a less robust build.

ESA and the agency's partners have already built part of the base. Using a mixture of silicon, aluminum, calcium, iron and magnesium oxides meant to simulate regolith — a mixture of dust and dirt — found on the moon, ESA and its partners printed a 2,205-pound (1,000 kilograms) piece of what part of the home could look like.

"The planned site for the base is at the moon’s southern pole, where there is near perpetual sunlight on the horizon," officials for Foster and Partners said in a statement.

The firm has started trying out the 3D printer in conditions similar to those on the surface of the moon. The team has started printing various structures inside a vacuum chamber.

This isn't the first time a space agency has considered 3D printing a lunar base  . Last year, NASA officials challenged researchers at Washington State University in Pullman, Wash. to 3D print the ceramic-like simulated lunar regolith into smooth, cylindrical shapes to test the strength of the material.

Foster + Partners is also partnering with other firms to build the first private spaceport in the world. Known as Spaceport America, the $209 million base will serve as a hub for commercial spaceflight. The spaceport should be completed later this year.