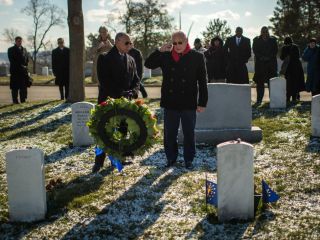 NASA honored the memories of the seven astronauts lost 10 years ago today (Feb. 1) in the space shuttle Columbia disaster, as well as the agency's other explorers who lost their lives in the pursuit of space exploration.

The solemn ceremony, held at the Kennedy Space Center Visitors Complex in Cape Canaveral, Fla., gathered friends and family members together to remember the lives of the Columbia's final astronaut crew as well as the seven astronauts lost in the Challenger shuttle disaster on Jan. 28, 1986 and three astronauts who perished in the Apollo 1 fire on Jan. 27, 1967.

"We got about the business of picking up the pieces, ensuring that their loss was not in vain," said Robert Cabana, the directory of the Kennedy Space Center. "They were doing their very best to be successful, but we are human and oftentimes when lacking sufficient data we make poor decisions and that results in tragic events like Apollo, Challenger and Columbia. I believe we've learned from them. We've risen above them but we must never forget the lessons learned in the past."

President Barack Obama, who did not attend the ceremony, also released a statement commemorating the sacrifice made by the Columbia astronauts and the crews of Challenger and Apollo 1.

"As we undertake the next generation of discovery, today we pause to remember those who paid the ultimate sacrifice on the journey of exploration," Obama said. "Right now we are working to fulfill their highest aspirations by pursuing a path in space never seen before, one that will eventually put Americans on Mars." [NASA Honors Fallen Astronauts (Photos)]

"In the years after we returned the shuttles to flight, we completed an engineering marvel," Bolden said. "The International Space Station now soars above us, an unparalleled and unique orbiting laboratory that is our foothold to the rest of the solar system. We are in a new era of exploration, where the work and sacrifice of those who have gone before will help us once again launch American astronauts from American soil and send them farther into deep space than we have ever gone."

Bolden attended the Ilan Ramon International Space Conference in Herzliyya, Israel, and was not able to attend the ceremony today.

During the NASA ceremony, speakers remembered the astronauts for their dedication to curiosity and human exploration while standing at a podium in front of the "Space Mirror" — a memorial wall listing the names of every NASA crew member lost during an accident in the space agency's history.

"We remember the astronauts that took the daring step of accepting the challenge of spaceflight," said Eileen Collins, a retired NASA astronaut who commanded the first shuttle flight after the Columbia tragedy. "For the Columbia crew, it was a fulfillment of their dreams to have an adventure, to live and work in an environment you can't simulate on Earth."

"It's a type of freedom to look down on the planet, to be part of a mission," Collins added. "The Columbia crew was taking baby steps, but big steps begin with baby steps. They were passionate about this mission."

The fallen astronauts were also remembered for their personal achievements. Evelyn Husband-Thompson, the widow of Columbia commander Rick Husband, shared her memories of each of the astronauts on board the space shuttle as it broke apart upon re-entry over East Texas.

"This isn't just historic, but also personal," Husband-Thompson said. "We remember the Columbia crew as friends."

"Despites its tragedies, its successes are also part of history. The shuttle was an engineering wonder. The shuttle was a test program, but it achieved its ultimate goal: the International Space Station," Collins said. "We have inspired over 30 years of school children to study math and science."

A subsequent investigation attributed the loss of Columbia and its crew as much to complacency in NASA's internal culture as to the foam debris strike. The tragedy led to new heat shield repair tools and techniques for subsequent shuttle missions, an ultimately spurred the retirement of the space shuttle program altogether. The last shuttle mission flew in 2011 and today all three of NASA's remaining orbiters are in museums.

The first space shuttle disaster would occur 19 years and one day later, on Jan. 28, 1986, when the shuttle Challenger broke apart after liftoff after an O-ring failure in one of the orbiter's twin solid rocket boosters caused the shuttle's external tank to explode. Killed in the explosion were astronauts Francis "Dick" Scobee, Ronald McNair, Mike Smith, Ellison Onizuka, Judy Resnik, Greg Jarvis and Connecticut teacher Christa McAuliffe. It took three years for NASA to resume shuttle missions.

Today, NASA relies on Russia's Soyuz spacecraft to fly Americans to and from low-Earth orbit. However, space agency officials hope to rely on new privately owned spacecraft to taxi astronauts to and from the International Space Station by 2015 or later.