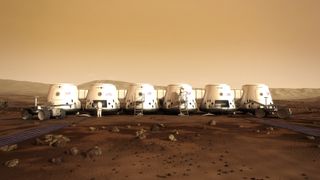 If you think you have the right stuff to help colonize Mars, you'll soon get your chance to prove it.

The Netherlands-based nonprofit Mars One, which hopes to put the first boots on the Red Planet in 2023, released its basic astronaut requirements today (Jan. 8), setting the stage for a televised global selection process that will begin later this year.

Mars One isn't zeroing in on scientists or former fighter pilots; anyone who is at least 18 years old can apply to become a Mars colony pioneer. The most important criteria, officials say, are intelligence, good mental and physical health and dedication to the project, as astronauts will undergo eight years of training before launch.

"Gone are the days when bravery and the number of hours flying a supersonic jet were the top criteria," Norbert Kraft, Mars One's chief medical director and a former NASA researcher, said in a statement. "Now, we are more concerned with how well each astronaut works and lives with the others, in the long journey from Earth to Mars and for a lifetime of challenges ahead."

The organization will fund most of its ambitious activities by staging a global reality-TV event that follows the colonization effort from astronaut selection through the settlers' first years on Mars.

Mars One, which transitioned from a private company to a nonprofit late last year, has already received a number of inquiries from prospective colonists, officials said.

"Well before the official Astronaut Selection Program, we received more than 1,000 emails from individuals who desire to go to Mars," Suzanne Flinkenflögel, Mars One's communications director, said in a statement. "We are working hard to launch our selection campaign as soon as possible, to open the doors to everyone who aspires to do something tremendous in their lifetime."

Final astronaut candidates will be selected after review by Mars One experts and a global TV event. Those chosen will be employed by Mars One during their Earth-based training and for the length of their time on the Red Planet, officials said.

To learn more about the selection process, go to www.thenextgiantleap.com.