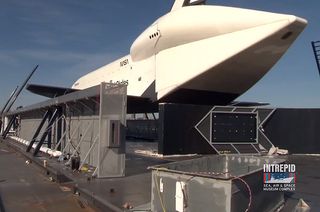 The New York City museum home of NASA's retired space shuttle Enterprise is set to reopen to the public Friday (Dec. 21), following its closure in late October due to Hurricane Sandy and the damage that the "superstorm" caused to the facility.

Visitors to the Intrepid Sea, Air & Space Museum, which is located at Pier 86 on Manhattan's west side, will once again be able to board the converted World War II aircraft carrier, the U.S.S. Intrepid, and tour many of its maritime and aviation exhibits.

Enterprise's exhibit, however, won't be restored until next spring. Guests this week will be able to see the prototype space shuttle from the museum's flight deck and along the pier. Enterprise, which never flew in space, was used for a series of piloted approach and landing tests in the 1970s.

The Intrepid's Space Shuttle Pavilion, which was housed inside a pressurized fabric structure, first opened in July. Severe flooding from the tropical-cyclone-force storm and strong winds resulted in the Enterprise's climate-controlled housing coming down. [Superstorm from Space: Hurricane Sandy Satellite Photos]

"Once the power coming from the generator and backup generators failed, the inflation on the support structure for the Space Shuttle Pavilion also failed, and it started to deflate the tent," Al Barto, Intrepid's director of operations, said in a video statement. "The tent was then caught on one of our light towers, which produced a small tear that ended up being a larger tear because of the winds."

As the 60-foot-high (18 meters) pavilion came down, some of its fabric got snagged on Enterprise's vertical stabilizer, which caused the top of the black-and-white tail to break off.

"The shuttle damage from the storm was relatively minor," Boehm said. "We are in the middle of the repairs. We're going to have it repaired pretty quickly."

"We have actually discussed this with NASA," he added. "Very straightforward, typical airplane repairs. Nothing out of the ordinary for us. We've made parts like this before. Just another challenge."

Easing Enterprise's restoration was the recovery of the tip of its tail.

"It was luckily recovered," said Dina Ingersole, an aircraft restoration and space shuttle Enterprise specialist at the Intrepid. "We are fixing it and working to repair it to put it back in place."

"We've straightened out the metal that was all bent, and we're cleaning out all the rivets so we can put fresh rivets in and put it all back together and then put it back in situ on top of the orbiter," she said.

The Intrepid plans to raise a new Space Shuttle Pavilion to envelop Enterprise in the spring. How the new display will differ from the previous design remains to be seen.

In the meantime, Enterprise is exposed to the elements, though not for the first time in its nearly 40-year history.

"The Enterprise is built to withstand the elements and in the past has been exposed for lengthy periods of time," the Intrepid wrote on its website. "However, we are working diligently on covering her during the winter months as we redesign and re-erect a pavilion experience."

"In the coming weeks, [the] Intrepid will be constructing scaffolding around Enterprise that will allow us to drape a protective cover over her to protect her from the winter elements including snow, rain and winds," a spokesman further told collectSPACE.com.

A new temporary exhibit about space shuttle Enterprise's history will open on the Intrepid's interior Gallery Deck on Jan. 17, 2013.