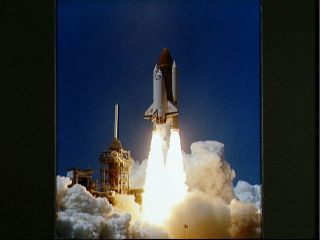 A view of the shuttle Challenger's maiden STS-6 launch on April 4, 1983. In this view, Challenger is just clearing the launch pad in a cloud of smoke.
(Image: © NASA)

The space shuttle Challenger was the second shuttle to reach space, in April 1983. It successfully completed nine milestone missions during its nearly three years of service. In total, the spacecraft spent 62 days, 7 hours, 56 minutes and 22 seconds in space, according to CBS. Challenger hosted the first spacewalk of the space shuttle program on April 7, 1983, and carried the first American female and first black astronauts.

From test vehicle to space vehicle

NASA originally intended Challenger to be a test vehicle, according to the Kennedy Space Center. Rockwell International, an aerospace manufacturing company, began building the shuttle in November 1975 and then sent it to Lockheed Martin, an aerospace technology company, for structural testing starting on April 2, 1978. According to NASA, computer models at the time were not sophisticated enough to calculate the stresses on the shuttle during different phases of flight.

The shuttle, then known as STA-099, went through 11 months of vibration testing in a specially formulated rig, NASA said. This custom-designed machine could bring the shuttle through a simulation of all phases of flight, from liftoff to landing. Three hydraulic cylinders, each with 1 million lbs. of force, were used as substitute space shuttle main engines.

In 1979, NASA awarded Rockwell International a supplemental contract to convert the test vehicle to a spacecraft. This would expand the shuttle fleet to two spacecraft, with Columbia being the first.

It took two more years for Rockwell to perform the conversion. Among other things, workers had to strengthen the wings, put in a real crew cabin instead of a simulated one and install heads-up displays for the astronauts working inside. Work was completed on Oct. 23, 1981.

Delays for the first flight

Challenger was expected to go into space on Jan. 20, 1983, to release the first Tracking and Data Relay Satellite (TDRS), which later became part of a series of satellites that astronauts used to stay in touch with controllers back home. Several technical malfunctions pushed the launch back, though.

First, NASA discovered a hydrogen leak in the No. 1 main engine aft compartment during a flight readiness test in December. In a second test on Jan. 25, 1983, NASA discovered cracks in the engine that were causing the leak.

The agency then took several months to remove the engines and test them. While engines No. 2 and No. 3 were deemed healthy, NASA replaced engine No. 1.

After another delay due to a problem with the TDRS, Challenger launched successfully on April 4, 1983, on mission STS-6. Crewmembers set the satellite free. Astronauts Story Musgrave and Donald Peterson executed the first spacewalk of the shuttle program.

In addition to milestones in space technology, Challenger was also host to several cultural firsts in the space shuttle program. The first American female astronaut, Sally Ride, rode up on Challenger on STS-7 in June 1983.  The first black astronaut, Guion Bluford, reached space on STS-8.

On STS-41G in 1984, two women — Ride and Kathryn Sullivan — flew on one mission for the first time — as well as the first Canadian, Marc Garneau.

Other milestones Challenger achieved included the first night launch and landing (STS-8) and the first operational Spacelab flight (STS-51B). Spacelab was a European space laboratory that fit into a shuttle's cargo bay and included several experiments designed for tests in microgravity. It flew on Columbia on STS-9 for the first time, but Challenger's mission is considered the first working one.

Some of Challenger's most memorable moments took place in April 1984, on STS-41C. That mission featured the very first astronaut repair of a satellite.

To get at the nonfunctional Solar Maximum Mission (SMM) satellite, astronaut George Nelson strapped himself into the Manned Maneuvering Unit, which was a jet-powered backpack designed for astronauts to fly in space. It had been tested on only one mission before this one.

The crew maneuvered Challenger until it was only 200 feet from the satellite. Then, Nelson carefully left the safety of the shuttle and flew over to the satellite. A fixture on the front of his backpack let Nelson dock with the satellite, which was slowly tumbling in space.

Next, he fired the jets on his backpack to stop the satellite's spin. Crewmembers on Challenger then reached out with the shuttle's Canadarm robotic arm and plucked the satellite out of empty space and into the payload bay.

Nelson and crewmate James "Ox" Van Hoften repaired the satellite, then the crew lofted the satellite back into space. SMM continued functioning for several years, then burned up in the atmosphere in December 1989.

It was a cold morning on Jan. 28, 1986, when Challenger was supposed to fly into space. Temperatures dipped below freezing and some of the shuttle's engineers were concerned about the integrity of the seals on the solid rocket boosters in such low temperatures.

Nonetheless, Challenger launched at 11:38 a.m. Eastern time in front of more media attention than usual, since it was carrying the first teacher to go into space. Christa McAuliffe was planning to give lessons while in orbit.

But McAuliffe and the rest of the crew never made it. In full view of the television cameras, Challenger broke up 73 seconds after launch.

"Flight controllers here are looking very carefully at the situation. Obviously a major malfunction," the NASA launch commentator said, as pieces of the shuttle fell from the sky into the Atlantic.

Salvage crews spent several weeks recovering pieces of the shuttle and carefully bringing up the remains of the seven astronauts. Remains that could be identified were turned over to the families, while the rest were buried in a monument to the Challenger crew at Arlington National Cemetery on May 20, 1986.

A presidential commission was convened to look into the incident, chaired by former Attorney General and Secretary of State William P. Rogers. It included participation from Neil Armstrong (the first man on the moon) and NASA astronaut Sally Ride, among others.

The commission report talked about the technical causes of the accident, which was traced to cold weather degrading the seal on the solid rocket boosters designed to help bring the shuttle into orbit. [The Space Shuttle Challenger Disaster: What Happened? (Infographic)]

Additionally, it brought to light cultural problems at NASA, such as failing to report all problems to the launch decision team. The commission also said that the shuttle's proposed flight rate was unsustainable, given the size of its workforce.

In the wake of what happened with Challenger, NASA made technical changes to the shuttle and also worked to change the culture of its workforce. The shuttle program resumed flights in 1988.

After the Challenger wreckage was examined, most of the pieces were buried and sealed in abandoned Minuteman missile silos at Cape Canaveral Air Force Station, where they remain today.

Challenger's explosion changed the space shuttle program in several ways. Plans to fly civilians in space (such as teachers or journalists) were shelved for the next 22 years, until Barbara Morgan, who was McAuliffe's backup, flew aboard Endeavour in 2007. Satellite launches were shifted from the shuttle to reusable rockets. Additionally, astronauts were pulled off duties such as repairing satellites, and the Manned Maneuvering Unit was not flown again, to better preserve astronaut safety.

Every January, NASA pauses to remember the last crew of Challenger and the other crews lost in pursuing space, on a NASA Day of Remembrance.

Visitors to the Kennedy Space Center can view debris from Challenger's last mission (as well as Columbia) at an exhibit called "Forever Remembered," which opened in 2015. The debris is on display at the visitor's center.